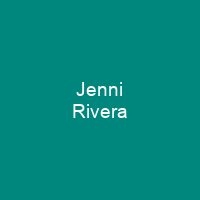 Jenni Rivera Saavedra was an American singer, songwriter, actress, television producer, spokesperson, philanthropist and entrepreneur. Rivera, along with six others, died in a plane crash near Monterrey, on December 9, 2012. She has sold more than 20 million records worldwide, also making her the highest-earning banda singer of alltime.

About Jenni Rivera in brief

Dolores Janney \”Jenni\” Rivera Saavedra was an American singer, songwriter, actress, television producer, spokesperson, philanthropist and entrepreneur. Rivera began recording music in 1992. Her recordings often had themes of social issues, infidelity, and relationships. Rivera, along with six others, died in a plane crash near Monterrey, on December 9, 2012. A proclamation was given officially naming August 6 “Jenni Rivera Day” by the Los Angeles City Council for all her charity work and community involvement. She has a star on the Las Vegas Walk of Stars, and she is one of the best-selling regional Mexican artists of all time. Her tenth studio album, Jenni, became her first No. 1 record on the Billboard Top Latin Albums chart in the United States. She was awarded two Oye! Awards, two Billboard Music Awards, twenty-two Billboard Latin Music Awards,. eleven Billboard Mexican Music Awards and eighteen Lo Nuestro Awards. She received four Latin Grammy nominations. Her father was a bartender who created the record label Cintas Acuario in 1987, which launched the career of Mexican singer and songwriter Chalzino Sánchez. At the onset of her musical career, she was told many times she would not make it as a regional Mexican music singer. At that time and today, the genre was and is still dominated by men. In 2011, Billboard magazine named her the \”top Latin artist of 2013\”, and the \”best selling LatinArtist of 2013\”.

She was born on July 2, 1969 and raised in Long Beach, California, to RosaSaavedra and Pedro Rivera, who were from Mexico. Her parents raised Rivera and her sister and four brothers in a tight-knit, musical household; her brother Lupillo is also a regional Mexico musician. She earned straight A’s in school until her sophomore year, when at 15 she became pregnant with the first of her five children, Janney Janney Marín-Rivera. She supported the two of them by selling CDs at flea markets, while working toward her GED at a continuation school and graduating as class valedictorian. She obtained a college degree in business administration and worked in real estate before going to work for her father’s record label and record company. She also appeared in and produced I Love Jenni starting in 2011 through 2013 and Chiquis ‘n Control in 2012. Her acting debut was in the film Filly Brown, which was released in 2013. The National Coalition Against Domestic Violence appointed her its spokesperson in the U.S. She was active in her community and donated her time to civic causes. She has sold more than 20 million records worldwide, also making her the highest-earning banda singer of alltime. Her first album, Chacalosa, was released on Capitol Latin division’s Latin division in 1995. She made more recordings and signed to Capitol Latin Division.

You want to know more about Jenni Rivera?

This page is based on the article Jenni Rivera published in Wikipedia (as of Jan. 23, 2021) and was automatically summarized using artificial intelligence.