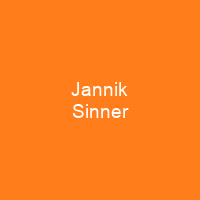 Jannik Sinner is an Italian professional tennis player. He has been ranked as high as No. 37 in the world. At the 2020 French Open, he became the youngest quarterfinalist in the men’s singles event since Novak Djokovic in 2006.

About Jannik Sinner in brief

Jannik Sinner is an Italian professional tennis player. He has been ranked as high as No. 37 in the world by the Association of Tennis Professionals. At the 2020 French Open, he became the youngest quarterfinalist in the men’s singles event since Novak Djokovic in 2006. He won his first ATP title at the 2020 Sofia Open, and is the youngest ATP title-holder since 2008. Sinner has an excellent two-handed backhand, and has led the ATP Tour in the amount of topspin on the shot. He was one of Italy’s top junior skiers from eight to twelve years old, winning a national championship in giant slalom at age eight and earning a national runner-up at age twelve. At age thirteen, Sinner decided to give up skiing and football in favor of tennis because he preferred to compete directly against an opponent. He moved to Bordighera on the Italian Riviera to train at the Piatti Tennis Centre under Riccardo Piatti and Massimo Sartori, a decision which his parents supported. He began playing on the ITF Junior Circuit in 2016.

Despite having limited success as a junior, he moved mainly to the professional tour following the end of 2017. He never played the main draw of any high-level Grade 1 events in singles, and the only higher-level grade A tournament he entered was the Trofeo Bonfiglio. He finished the year with his only ITF title in doubles, and he finished the season with a ranking of No 551. He became the first person born in 2001 to reach a Challenger final and the youngest Italian to win a Challenger title in history. After his first two ITF Futures titles, he rose up over 200 spots in ATP rankings to No 324. He then won the ATP Newcomer of the Year award in 2019 after breaking through into the top 100, reaching his first semifinal, and winning the Next Generation ATP Finals in Milan over Alex de Minaur. He continued to rise into theTop 50 in 2020 with his first top 10 victories, a Grand Slam quarterfinal, and a maiden ATP title.

You want to know more about Jannik Sinner?

This page is based on the article Jannik Sinner published in Wikipedia (as of Dec. 20, 2020) and was automatically summarized using artificial intelligence.