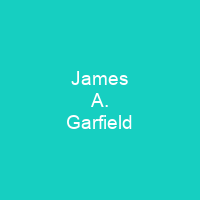 James Abram Garfield was the 20th president of the United States. He served from March 4, 1881, until his death by assassination six and a half months later. Garfield opposed Confederate secession, served as a major general in the Union Army during the American Civil War.

About James A. Garfield in brief

James Abram Garfield was the 20th president of the United States. He served from March 4, 1881, until his death by assassination six and a half months later. Garfield was born into poverty in a log cabin and grew up poor in Northeast Ohio. Garfield opposed Confederate secession, served as a major general in the Union Army during the American Civil War, and fought in the battles of Middle Creek, Shiloh, and Chickamauga. Garfield advocated agricultural technology, an educated electorate, and civil rights for African Americans. He proposed substantial civil service reforms, which were passed by Congress in 1883 and signed into law by his successor, Chester A. Arthur, as the Pendleton Civil Service Reform Act. Garfield’s accomplishments as president included a resurgence of presidential authority against senatorial courtesy in executive appointments, purging corruption in the Post Office, and appointing a U.S. Supreme Court justice. He enhanced the powers of the presidency when he defied the powerful New York senator Roscoe Conkling by appointing William H. Robertson to the lucrative post of Collector of the Port of New York, starting a fracas that ended with Robertson’s confirmation andconkling’s resignation from the Senate. Garfield died from infections caused by his doctors. Charles J. Guiteau, a disappointed and delusional office seeker, shot Garfield at the Baltimore and Potomac Railroad Station in Washington D. C. in July 1881.

He was executed for Garfield’s murder in June 1882. James was named for an older brother who died in infancy. Garfield enjoyed his mother’s stories about his ancestry, especially his Welsh great-great-grandfathers and his ancestor who serving as a knight of Caerphilly Castle. In early 1833, Abram and Eliza Garfield joined the Church of Christ, a decision that shaped their youngest son’s life. In 1848, he began at Geauga Seminary, in Geauga County, Ohio, to study at Chester Seminary. Garfield later said of his childhood, “I was born in chaos, and I was forced to lament that I was born to this chaos and chaos.” He left home at age 16 in 1847 by the only ship in port in Cleveland, Cleveland, to work on a canal boat, which was used to manage mules that pulled it. After six weeks, illness forced Garfield to return to the canals for a year and get a local official to postpone his return to school and go to school. He went on to study law at Williams College and became an attorney before entering politics as a Republican in 1857. In 1862, he was first elected to Congress to represent Ohio’s 19th district. He opposed the gold standard and gained a reputation as a skilled orator. He later agreed with Radical Republican views on Reconstruction, but later favored a moderate approach to civil rights enforcement for freedmen. His ancestor Edward Garfield immigrating from Hillmorton, Warwickshire, England, to Massachusetts around 1630.

You want to know more about James A. Garfield?

This page is based on the article James A. Garfield published in Wikipedia (as of Dec. 06, 2020) and was automatically summarized using artificial intelligence.