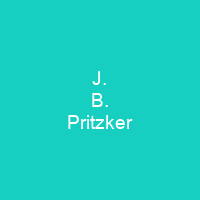 Jay Robert Pritzker is an American businessman, philanthropist, and politician serving as the 43rd Governor of Illinois. He defeated Republican incumbent Bruce Rauner in the general election on November 6, 2018, and took office on January 14, 2019. He is a member of the Pitzerker family that owns the Hyatt hotel chain.

About J. B. Pritzker in brief

Jay Robert Pritzker is an American businessman, philanthropist, and politician serving as the 43rd Governor of Illinois. He was the Democratic nominee for governor of Illinois in the 2018 gubernatorial election. He defeated Republican incumbent Bruce Rauner in the general election on November 6, 2018, and took office on January 14, 2019. He has an estimated personal net worth of USD 3.4 billion. He is a member of the Pitzerker family that owns the Hyatt hotel chain. The Pritzkers are consistently named near the top of the Forbes \”America’s Richest Families\” list since its 1982 inception. In 2008, he served as national co-chairman of Hillary Clinton’s campaign. He supported President Barack Obama in the 2008 general election and helped bring the Clinton and Obama campaigns in Illinois together. In 1998, he ran for the U.S. House of Representatives in Illinois’s 9th congressional district, spending a half-million dollars from his personal fortune on television ads in the Chicago market. He received the Entrepreneurial Champion Award from the Chicagoland Chamber of Commerce for his efforts to promote economic development and job creation. He founded 1871, a non-profit digital startup incubator, Chicago’s digital startup center. He co-founded Chicago Ventures and funded the startup of Techstars Chicago and Built in Chicago. He served as chairman of ChicagoNEXT, Chicago Mayor Rahm Emanuel’s council on innovation and technology. In May 2017, the Chicago Tribune published an 11-minute FBI wiretap of Pritzer and then-Illinois Governor Rod Blagojevich in 2008 discussing campaign contributions and options forPritzker to be appointed to statewide office.

In the tapes, BlagoJevich asked Pritzke if he would like to beappointed state treasurer, to which he responded, “Yeah, that’s the one I would want.” He later apologized for a number of controversial and incendiary comments that he made in a private conversation that he had made in private. He said: “I’ve not been accused of any wrongdoing. I have not done anything wrong. No allegations of wrongdoing were ever made by law enforcement against me.’’ He is named after both of his father’s brothers, Jay and Bob. He attended Massachusetts boarding school Milton Academy and then graduated from Duke University with a Bachelor of Arts degree in political science. He went on to earn his Juris Doctor degree from Northwestern University School of Law. He also served on the Washington, D.C. legislative staffs of U. S. Senator Terry Sanford, U. s. Senator Alan J. Dixon, and U. S. Congressman Tom Lantos. He supports President Obama and the 2008 Democratic National Convention and the 2016 Democratic National convention. He was a delegate to the 2008 presidential election and supported President Obama’s campaign in Illinois. In 2012, he was named as the Democratic Leadership for the 21st Century, a national organization dedicated to attracting voters under the age of 40 to the Democratic Party.

You want to know more about J. B. Pritzker?

This page is based on the article J. B. Pritzker published in Wikipedia (as of Jan. 06, 2021) and was automatically summarized using artificial intelligence.

Jay and the Americans