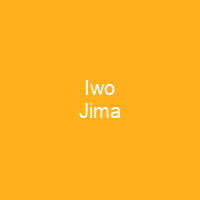 Iwo Jima is one of the Japanese Volcano Islands and lies south of the Bonin Islands. It was first visited by Spanish sailor Bernardo de la Torre on the San Juan de Letrán when trying to return from Sarangani in the 16th century. In 1779, it was charted as Sulphur Island during Captain James Cook’s third surveying voyage.

About Iwo Jima in brief

Iwo Jima is one of the Japanese Volcano Islands and lies south of the Bonin Islands. It is administered as part of the Ogasawara Subprefecture of Tokyo. Since July 1944, when all the civilians were forcibly evacuated, the island has had a military-only population. The highest point is Mount Suribachi at 169 m high. The island has a tropical climate with hot summers and warm winters. It was first visited by Spanish sailor Bernardo de la Torre on the San Juan de Letrán when trying to return from Sarangani in the 16th century. In 1779, it was charted as Sulphur Island, the literal translation of its official name, during Captain James Cook’s third surveying voyage. The name was translated into Late Middle Japanese with the Sino-Japanese rendering iwau-tau, from Middle Chinese ljuw-huang \”sulfur\” and táw \”island\”. The historical spelling iwautau had come to be pronounced Iwō-tō by the age of Western exploration, and the 1946 orthography reform fixed the spelling and pronunciation at Iō-Tō. The US military occupied Iwo JimA until 1968, when it was returned to Japan. The most prominent feature is a vent that is thought to be dormant and is 161 m high, named after a Japanese grinding bowl. The visible island stands on a plateau at depth about 15 m, which is the top of an underwater mountain 2 km tall and 40  diameter at base.

The volcano has a history of minor volcanic activity a few times per year but no evidence of an impending major eruption has been observed, but no major major eruptions have been observed in the last 100 years. Before World War II, IwoJima was administered as Iōjima and was part of Tokyo, with a civilian population of 1,018 households in June 1943 in a primary school in six settlements. In 2007, the official Japanese pronunciation of the island’s name would revert to the pre-war Iō Tō. Former island residents protested against this rendering and the Ministry of Land, Infrastructure, Transport and Tourism’s Geographical Survey Institute debated the issue and formally announced on June 18, 2007, that the officialJapanese pronunciation would revert. 80 km north is North Iwo. Jima and 59 kilometres south is South I Wo Jima ; these three islands make up the Volcano Islands group of the Ogaswara Islands. Just south of Minami-Iō-jima are the Mariana Islands. Thevisible island stands in a plateau at depth of about 15 m, at base of a submerged volcanic caldera surrounding the island. It has a long, hot summers with mild nights with mild winters.

You want to know more about Iwo Jima?

This page is based on the article Iwo Jima published in Wikipedia (as of Dec. 28, 2020) and was automatically summarized using artificial intelligence.