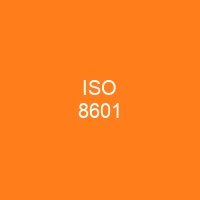 ISO 8601 is an international standard covering the exchange of date- and time-related data. It applies to representations and formats of dates in the Gregorian calendar, of times based on the 24-hour timekeeping system, and combinations thereof. The standard does not assign any specific meaning to elements of the datetime to be represented.

ISO 8601 is an international standard covering the exchange of date- and time-related data. It was issued by the International Organization for Standardization and was first published in 1988. It applies to representations and formats of dates in the Gregorian calendar, of times based on the 24-hour timekeeping system, of time intervals, and combinations thereof. The standard does not assign any specific meaning to elements of the datetime to be represented; the meaning will depend on the context of its use. It has been superseded by a second edition ISO 8601: 2000 in 2000, by a third edition ISO 8601: 2004 published on 1 December 2004, and withdrawn and revised by ISO 8601-1: 2019 on 25 February 2019. It unified and replaced a number of older ISO standards on various aspects of date and time notation: ISO 2014, ISO 2015, ISO 2711, ISO 3307, and ISO 4031. It also introduced the all-numeric date notation in most-to-least-significant order –. The ISO week numbering system was introduced in ISO 2015, and the identification of days by ordinal dates was originally defined in ISO 2711. The fourth revision of the standard ISO 86 01: 2019 represents slightly updated contents of the previous ISO 8602: 2004 standard, whereas the new ISO 861-2: 2019 defines various extensions such as uncertainties or parts of the Extended DateTime Format. The standard uses the Gregorians calendar, which \”serves as a international standard for civil use.

It therefore represents years from 0000 to 9999, year 0000 being equal to 1 BC and all others AD. However, years prior to 1583 are not automatically allowed by the standard. Instead, values in the range through shall only be used by mutual agreement of the partners in information interchange. The standard states that every date must be consecutive, so usage of the Julian calendar would be contrary to the standard. In representations for interchange, dates and times are arranged so the largest temporal term is placed to the left and each successively smaller term is place to the right of the last term. For example, one-digit day of that month, 01 through 31, may be represented as either \”5 April 1981\” or \”05 April 1981-04-05-04 in the basic format or in the extended format in the format of ISO 10405 or 10405 or 10405. It must be written in a combination of Arabic numerals and certain characters that are given specific meanings within the standard; the implication is that some commonplace ways of writing parts of dates, such as January or Thursday, are not allowed in interchange representations. It allows for calendar dates to be written with reduced precision. The standards also allows for Calendar date to be reduced to reduced precision with a four-digit year to avoid the year 2000 problem. Earlier dates, in the proleptic Gregorian Calendar, may also be used.

This page is based on the article ISO 8601 published in Wikipedia (as of Dec. 19, 2020) and was automatically summarized using artificial intelligence.