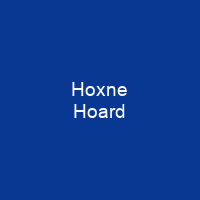 The Hoxne Hoard is the largest hoard of late Roman silver and gold discovered in Britain. It consists of 14,865 Roman gold, silver, and bronze coins and approximately 200 items of silver tableware and gold jewellery. In 1993, the Treasure Valuation Committee valued the hoard at £1. 75 million.

About Hoxne Hoard in brief

The Hoxne Hoard is the largest hoard of late Roman silver and gold discovered in Britain. It consists of 14,865 Roman gold, silver, and bronze coins and approximately 200 items of silver tableware and gold jewellery. The objects are now in the British Museum in London, where the most important pieces and a selection of the rest are on permanent display. In 1993, the Treasure Valuation Committee valued the hoard at £1. 75 million. The find helped to improve the relationship between metal detectorists and archaeologists, and influenced a change in English law regarding finds of treasure. The hoard is of particular archaeological significance because it was excavated by professional archaeologists with the items largely undisturbed and intact. The coins of the hoard date it after AD 407, which coincides with the end of Britain as a Roman province. The owners and reasons for burial of the hoard are unknown, but it was carefully packed and the contents appear consistent with what a single very wealthy family might have owned. It is likely that the hoard represents only a part of the wealth of its owner, given the lack of large silver serving vessels and of some of the most common types of jewellery, such as a gold body-chain and silver-gilt pepper-pots. The Hoard was discovered in a farm field about 2. 4 kilometres southwest of the village of Hoxnne in Suffolk on 16 November 1992. The entire hoard was excavate in a single day, with the removal of several large blocks of unbroken material for laboratory excavation. The area was searched with metal detectors within a radius of 30 metres from the find spot.

Peter Whatling’s missing hammer was also recovered and donated to the British museum. The discovery was leaked to the press, and the Sun newspaper ran a front-page story on 19 November, alongside a picture of Lawes with his metal detector. Newspapers quickly lost interest in the hoard, allowing British Museum to sort, clean, and stabilise it without further disruption from the press. A Coroner’s inquest was held at Lowestoft on 3 September 1993 and the hoard was declared a treasure trove, meaning it was deemed to have been hidden with the intention of being recovered at a later date. However, the customary practice at the time was to provide a reward to anyone who found and provided the equivalent of its value with its money being reported on the market, with its value being the equivalent to the money being declared by the Crown. In the event, no one claimed to have found the treasure trove and it was declared to be of no value to the Crown, as such it belongs to no one but the owner of the items. The British Museum held a press conference at the museum on 20 November to announce the discovery, allowing it to be cleaned and cleaned. The initial cleaning and conservation was completed within a month of its discovery. The items had been grouped within the chest; for example, pieces such as ladles and bowls were stacked inside one another, and other items were grouped in a way consistent with being held within an inner box.

You want to know more about Hoxne Hoard?

This page is based on the article Hoxne Hoard published in Wikipedia (as of Oct. 31, 2020) and was automatically summarized using artificial intelligence.