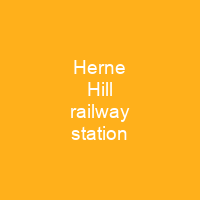 Herne Hill railway station is in the London Borough of Lambeth, South London. It is on the Chatham Main Line and Sutton Loop railway lines. Train services are provided by Thameslink to London Blackfriars, Farringdon, St Pancras International and St Albans.

Herne Hill railway station is in the London Borough of Lambeth, South London. It is on the Chatham Main Line and Sutton Loop railway lines. The station building on Railton Road was opened in 1862 by the London, Chatham and Dover Railway. The arrival of the railways transformed Herne Hill from a wealthy suburb with large residential estates into a densely populated urban area. Train services are provided by Thameslink to London Blackfriars, Farringdon, St Pancras International and St Albans on the Thameslink route and by Southeastern to London Victoria and Orpington. The four tracks are served by two island platforms; northbound trains call at the western platform and southbound trains the eastern platform, providing cross-platform interchange between the two routes. There are flat junctions at each end of the station, where the lines to Loughborough Junction and Brixton diverge. The area now known as HerneHill had been a rural part of the Manor of Milkwell since the 13th century. Two tributaries of the River Effra met at the undeveloped site of the future station. In 1783 a timber merchant, Samuel Sanders, bought Hernehill from the Manor and granted leases for large plots of land to wealthy families. John Ruskin spent his childhood at an estate on herne Hill. The opening of the railway station, which provided convenient and cheap access to central London, started the urbanisation of the area. All of the large estates were eventually cleared to make way for many smaller houses.

The route from Beckenham Junction to Victoria via Stewarts Lane was the first section to be completed from 1852, going via Clapham, Brixton, Sydenham, Herne. Hill and Syden Hill. It was completed in 1858 and is close to Brockwell Park. In 1852 the Mid Kent and London and South Western Junction Railways Company proposed to build a railway line through the area, but the company had ceased to exist by 1860. No construction work was undertaken at that time and the company’s plans for the line were abandoned. In the late 1850s, the East Kent Railway had ambitions to run passenger trains between London and Kent, but it did not own any railway lines in inner London. It reached an agreement with the London,. Brighton and South Coast Railway to use its West End and Crystal Palace line to access Battersea and  Battersea. This arrangement incurred costly access fees necessary until the company obtained the Parliamentary authority to build in London in 1860. On 6 August 1860, the Metropolitan Extensions Act granted the company powers to build three inner London lines: Becken Junction to Hern Hill, Dulwich and Syne Hill and Batterseas. The first section of the line was completed and the first station to be built was Herne Hills. The line was opened from Victoria to Stewart Lane in 1852. The second section was completed on 6 August 1861.

You want to know more about Herne Hill railway station?

This page is based on the article Herne Hill railway station published in Wikipedia (as of Dec. 07, 2020) and was automatically summarized using artificial intelligence.