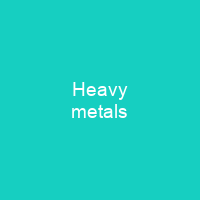 Heavy metals are relatively scarce in the Earth’s crust but are present in many aspects of modern life. They are used in golf clubs, cars, antiseptics, self-cleaning ovens, plastics, solar panels, mobile phones, and particle accelerators. Some heavy metals are either essential nutrients, or relatively harmless, but can be toxic in larger amounts.

About Heavy metals in brief

Heavy metals are generally defined as metals with relatively high densities, atomic weights, or atomic numbers. A density of more than 5 gcm3 is sometimes quoted as a commonly used criterion. Heavy metals are relatively scarce in the Earth’s crust but are present in many aspects of modern life. They are used in golf clubs, cars, antiseptics, self-cleaning ovens, plastics, solar panels, mobile phones, and particle accelerators. Six elements near the end of periods 4 to 7 sometimes considered metalloids are treated here as metals: germanium, arsenic, selenium, antimony, tellurium, and astatine. Oganesson is treated as a nonmetal. The definitions surveyed in this article encompass up to 96 out of the 118 known chemical elements; only mercury, lead and bismuth meet all of them. Some heavy metals are either essential nutrients, or relatively harmless, but can be toxic in larger amounts or certain forms. Other heavy metals, such as cadmium, mercury, and lead, are highly poisonous. Potential sources of heavy metal poisoning include mining, tailings, industrial waste, agricultural runoff, occupational exposure, paints and treated timber. Physical and chemical characterisations of heavy metals need to be treated with caution, as the metals involved are not always consistently defined. As well as being relatively dense, heavy metals tend to be less reactive than lighter metals and have far fewer soluble sulfides and hydroxides.

While it is relatively easy to distinguish a heavy metal from a lighter metal such as tungsten, a few heavy metals have some of the characteristics of lighter metals, and, lighter metals such as beryllium, scandium, and titanium. In biochemistry,heavy metals are sometimes defined on the basis of the behaviour of their ions in a solution. In this scheme, the class B ions prefer nitrogen or sulfur donors; the status of the actinides is not completely settled. In 1997, Stephen Hawkes, a chemistry professor writing in the context of fifty years’ experience with the term, said it applied to ‘metals with insoluble sulfides’ He had seen the term used to refer to salts with colored salts, whose salts produce colored solutions in water and usually colored complexes. He suggested it would be useful to define them as heavy metals that are in row 3 to 16 of the periodic table. The term ‘heavy metal’ is now widely used in science, but there is no widely agreed criterion-based definition of a heavy metals. In metallurgy, for example, a heavyMetal may be defined on a density, whereas in physics the distinguishing criterion might be atomic number, and a chemist would likely be more concerned with chemical behaviour. The definition of heavymetal is not a completely settled scheme; it is not entirely clear whether the term is used in metallology or physics, or in biochemistry or in other areas of science.

You want to know more about Heavy metals?

This page is based on the article Heavy metals published in Wikipedia (as of Nov. 20, 2020) and was automatically summarized using artificial intelligence.