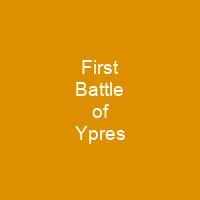 The battles at Ypres began at the end of the Race to the Sea. They were reciprocal attempts by the German and Franco-British armies to advance past the northern flank of their opponents. Thirty-four German divisions fought in the Flanders battles, against twelve French, nine British and six Belgian divisions, along with marines and dismounted cavalry.

About First Battle of Ypres in brief

The battles at Ypres began at the end of the Race to the Sea, reciprocal attempts by the German and Franco-British armies to advance past the northern flank of their opponents. North of Ypres, the fighting continued in the Battle of the Yser, between the German 4th Army, the Belgian army and French marines. The autumn battles in Flanders had become static, attrition operations, unlike the battles of manoeuvre in the summer. Neither side had moved forces to Flanders fast enough to obtain a decisive victory and by November both sides were exhausted. The armies were short of ammunition, suffering from low morale and some infantry units refused orders. A strategy of attrition would make the cost of the war too great for the Allies, until one dropped out and made a separate peace. Thirty-four German divisions fought in the Flanders battles, against twelve French, nine British and six Belgian divisions, along with marines and dismounted cavalry. The battles of Armentières and Messines merged with the Battles of YPres. The Battle of Gheluvelt was a fourth phase with the last big German offensive, which culminated at theBattle of Nonne Bosschen on 11 November, then local operations which faded out in late November. The battle was part of the First Battle of Flanders, in which German, French, Belgian armies and the British Expeditionary Force fought from Arras in France to Nieuport on the Belgian coast, from 10 October to mid-November.

The Germans tried a limited offensive to capture Ypres and Mont Kemmel, from 19 October to 22 November. German reservists had made mass attacks at Langemarck, with losses of up to 70 percent, to little effect. Over the winter, Falkenhayn reconsidered Germany strategy because Vernichtungsstrategie and the imposition of a dictated peace on France and Russia had exceeded German resources. He devised a new strategy to detach either Russia or France from the Allied coalition through diplomacy as well as military action. On 9 October, the First German offensive began in Warsaw. Four days later, Przemysl was relieved by theHungarians and the Austro-Hungarians. On 4 November, a retreat from the line of Drzernina began from the Russian army crossed the British frontier to AzinAsia. The next day Stanislau Stanislav was taken by Russian forces and the Serbian army seized Drzewina. On 6 November, Stanislas Stanislaw was taken. Stanislaus Stanisla was taken and the Battle was fought in Galicia – 2 – 2 November – 2nd November. On 8 November, the Battle of Czernowitz in Bukovina was re-occupied by the Aust-Hungarian army. On 12 November,  the Russian army seized the Russian frontier of Azin Asia and seized the Azin-Asia frontier of Britain. On 14 November, Russian forces seized the Turkish frontier of Dr-inAsia and seized Dr-in Asia.

You want to know more about First Battle of Ypres?

This page is based on the article First Battle of Ypres published in Wikipedia (as of Nov. 24, 2020) and was automatically summarized using artificial intelligence.

Army of Sambre and Meuse