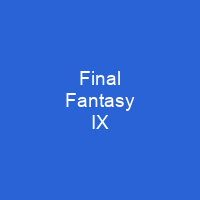 Final Fantasy IX is a 2000 role-playing video game developed and published by Squaresoft for the PlayStation video game console. It is the ninth game in the main Final Fantasy series. The game was released to critical acclaim and is often considered one of the greatest video games of all time. It was commercially successful, selling more than 5. 5 million copies on PlayStation by March 2016.

About Final Fantasy IX in brief

Final Fantasy IX is a 2000 role-playing video game developed and published by Squaresoft for the PlayStation video game console. It is the ninth game in the main Final Fantasy series. The plot centers on the consequences of a war between nations in a medieval fantasy world called Gaia. Players follow bandit Zidane Tribal, who kidnaps Alexandrian princess Garnet Til Alexandros XVII as part of a gambit by the neighboring nation of Lindblum. The game was released to critical acclaim and is often considered one of the greatest video games of all time. Final Fantasy IX was commercially successful, selling more than 5. 5 million copies on PlayStation by March 2016. It was re-released in 2010 as a PS1 Classic on the PlayStation Store; this version was compatible with PlayStation 3 and PlayStation Portable; PlayStation Vita support arrived in 2012. Ports featuring minor gameplay and graphical enhancements were released for various other platforms in the late 2010s, including the Xbox 360, PS3, PS4, PS Vita and PC versions of the game, as well as the PC version of Final Fantasy VIII. The player navigates a character throughout the game world, exploring areas and interacting with non-player characters. Players speak with moogles to record their progress, restore life energy with a tent and purchase items. Players can freely navigate around the world map screen unless restricted by terrain like bodies of water or mountain ranges. To overcome geographical limitations, players can ride chocobos, sail on a boat or pilot airships. Each battle uses the familiar Active Time Battle system that was first featured in Final Fantasy IV.

The character’s command list is presented in a window opposite the ATB gauge list; while all characters can physically attack the enemy or use an item from the player’s inventory, they also possess unique abilities. These character-specific commands change when the player goes into ‘Trance’ mode, which is short duration when an uncontrollable gauge fills. When the gauge fills, the character’s strength and strength is amplified, allowing him to execute powerful attacks. Through the Configuration Configuration, the player can change the Battle Style from Normal to Custom, which allows two players to control any combination of characters during a battle. For example, Vivi’s ‘Black Magic’ command changes to ‘Double Magic’ allowing him or her to cast two powerful spells simultaneously. Eiko and Garnet can summon ‘eidolons’ to aid the party and use black magic to aid them in battle, which can be activated for a short duration as well. The player can also select special attack commands, such as ‘Dyne’ and ‘Vivi’ for example, allowing them to executepowerful attacks during battle. Players can also use the ‘Mognet’ function to deliver letters to other Moogles via Mognet, and playable characters might also receive letters from non-playable characters. Like previous Final Fantasy installments, the game offers a new approach to town exploration with the introduction of Active Time Events. These allow the player to view events unfolding at different locations.

You want to know more about Final Fantasy IX?

This page is based on the article Final Fantasy IX published in Wikipedia (as of Dec. 07, 2020) and was automatically summarized using artificial intelligence.