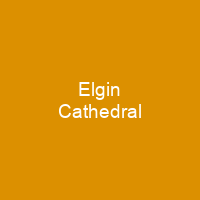 Elgin Cathedral is a historic ruin in Elgin, Moray, north-east Scotland. It was established in 1224 on land granted by King Alexander II outside the burgh of Elgin and close to the River Lossie. The homes of the dignitaries and canons, or manses, stood in the chanonry and were destroyed by fire on three occasions.

About Elgin Cathedral in brief

Elgin Cathedral is a historic ruin in Elgin, Moray, north-east Scotland. It was established in 1224 on land granted by King Alexander II outside the burgh of Elgin and close to the River Lossie. The cathedral went through periods of enlargement and renovation following the fires of 1270 and 1390. The homes of the dignitaries and canons, or manses, stood in the chanonry and were destroyed by fire on three occasions: in 1270, 1390 and 1402. After the removal of the lead waterproofing of the roof in 1567, the cathedral fell steadily into decay. Ownership was transferred from the Church to the Crown in 1689 but that made no difference to the building’s continuing deterioration. Only in the early years of the 19th Century did the Crown begin the conservation process. The stabilisation of the structure proceeded through until the end of the 20th Century with the large scale improvements to the two western towers. Only the precentor’s manse is substantially intact; two others have been incorporated into private buildings. A protective wall of massive proportions surrounded the cathedral precinct, but only a small section has survived. The two towers of the west front are mostly complete and were part of the first phase of construction. The wall had four access gates, one of which—the Pans Port—still exists. The last recorded rights for a monastery in Moray were recorded between December 1123 and April 1128. The Diocese of Moray was a regional bishopric unlike the pre-eminent see of the Scottish church, St Andrews, which had evolved from a more ancient monastic Celtic church and administered scattered localities.

It is uncertain whether there were bishops of Morays before c. 1120 but the first known prelate—possibly later translated to Dunkeld—was Gregory and was probably bishop in name only. Yet the next bishop was the absentee titular titular bishop William David, who died in 1136 and had probably done little to improve the stability of the see. He is believed to have promoted a monk in a ‘Pictish Church’ that is later called Dunfermline Abbey. Yet there is no basis for assertions that he was later promoted in a later stage of his life to become a bishop of the province. The next bishop to be promoted was Gregory, who was probably an aide to King David, and probably died in the 1130s. He was a signatory to the foundation charter of Scone Priory, issued by Alexander I in 1124, and again in a charter defining the legal rights of the monastery between December 123 and April 1124. In the same year, he witnessed a charter granted by David I to a monastery that is now known as Dun ferm Abbey in c128, and that is all that is that is known of Gregory with no evidence that he later became a bishop. In 1226 the cathedral was staffed with 18 canons and then increased to 23 by 1242. The number of canons had increased to 25 by the time of the Reformation in 1560.

You want to know more about Elgin Cathedral?

This page is based on the article Elgin Cathedral published in Wikipedia (as of Nov. 30, 2020) and was automatically summarized using artificial intelligence.