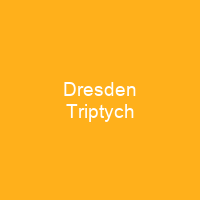 The Dresden Triptych is the only extant triptych attributed to Jan van Eyck. It is signed and dated 1437, and in the permanent collection of the Gemäldegalerie Alte Meister, Dresden. It consists of five individual panel paintings: a central inner panel, and two double-sided wings.

About Dresden Triptych in brief

The Dresden Triptych is the only extant triptych attributed to Jan van Eyck. It is signed and dated 1437, and in the permanent collection of the Gemäldegalerie Alte Meister, Dresden. It consists of five individual panel paintings: a central inner panel, and two double-sided wings. It echoes a number of the motifs of his earlier works while marking an advancement in his ability in handling depth of space. It establishes iconographic elements of Marian portraiture that were to become widespread by the latter half of the 15th century. The work may have been intended for private devotion, perhaps as a portable altarpiece for a migrant cleric. In this work, damaged coats of arms on the borders of the interior wings have been identified with the Giustiniani of Genoa – an influential albergo active from 1362 – who established trade links with Bruges as early as the mid-14th century. Until the discovery of the signature of the piece was variously dated to an early period in the 1420s to the late 1430s, which can be used to determine the date of its completion. The word “completed” may suggest the completion date, but as master painters of the era typically had workshops to assist major works, the painting can be seen as aggressively socially ambitious. This view is reinforced by the fact that it is only non-portrait to contain Van Eyck’s motto, ALC IXH XAN. It was mentioned in a May 10, 1597 record of a purchase by Vincenzo Gonzaga, Duke of Mantua, and was then sold with the Gonzaga Collection to Charles I of England in 1627.

After Charles’s fall and execution, it went to Paris and was owned by Eberhard Jabach, the Cologne-based banker and art dealer for Louis XIV and Cardinal Mazarin. A year after Jabach’s death in 1695, it passed to the Elector of Saxony, and next appears in a 1754 inventory of the Dresden Collection, attributed to Albrecht Dürer, until the German historian Aloys Hirt in 1830 established it as a vanEyck. The interior panels are outlined with two layers of painted bronze frames, inscribed with mostly Latin lettering. The texts are drawn from a variety of sources, in the central frames from biblical descriptions of the assumption, while the inner wings are lined with fragments of prayers dedicated to saints Michael and Catherine. The frame was removed in the course of a mid-20th century restoration, and confirmed with the 1959 discovery of a signature which is placed along with the words IOHANNIS DE EYCK ME FECIT ET CPLEVIT ANNO D.C. The word \”completed\” may suggest that he had little material involvement, and that his workshop had little time to work on the panels. In the central panel Mary is seated and holds the Christ Child on her lap, while on the left hand wing Archangel Michael presents a kneeling donor.

You want to know more about Dresden Triptych?

This page is based on the article Dresden Triptych published in Wikipedia (as of Nov. 30, 2020) and was automatically summarized using artificial intelligence.