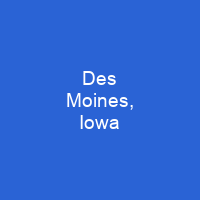 Des Moines takes its name from Fort Des Moines, which was named for the Des Moines River. The city’s population was 214,237 as of the 2019 population estimate. The six-county metropolitan area is ranked 83rd in terms of population in the United States with 699,292 residents.

About Des Moines, Iowa in brief

Des Moines takes its name from Fort Des Moines, which was named for the Des Moines River. The city’s population was 214,237 as of the 2019 population estimate. Des Moines is a major center of the US insurance industry and has a sizable financial services and publishing business base. Microsoft, Hewlett-Packard, and Facebook have built data-processing and logistical facilities in the area. As the state’s capital, it is the site of the first caucuses of the presidential primary cycle. Many presidential candidates set up campaign headquarters in Des Moines. The six-county metropolitan area is ranked 83rd in terms of population in the United States with 699,292 residents. It is the largest metropolitan area fully located within the state. A portion of the larger Omaha, Nebraska, metropolitan area extends into three counties of southwest Iowa. In addition, 15 prehistoric American Indian mounds were observed in this area by early settlers. At least three Late Prehistoric villages dating from about 1300 to 1700 stood in what later developed as downtown Des Moines or what is now called Polk County. Several have been found during excavations prior to the new wastewater treatment plant in southeastern Des Moines in December 2010. It was incorporated on September 22, 1851, as FortDes Moines. It is located on, and named after, theDes Moines River, which likely was adapted from the early French name, Rivière des Moines, meaning “River of the Monks’”.

It was adopted from the name given by French colonists. The historian Virgil Vogel claimed that the name was derived from Moingona, an Algonquian clan name, which means “Loon’s”. Some historians and researchers lacking linguistic or Algonqianist training concluded that Moedona meant “people by the portage” or something similar. This was where the earliest known encounters between the Moedons and European explorers took place. In 2015, Michael McCafferty of Indiana University, while studying the Miami-Illinois language, concluded that thename was actually a derisive term coined by the Peoria tribe. It translates, essentially, as “the feces-faces. ” One popular interpretation of the name Des Moines ignores Vogel’s research, and concludes that it refers to a group of French Trappist monks, who in the 17th century lived in huts built on top ofwhat is now known as the ancient Monks Mound at Cahokia, the majorCenter of Mississippian culture, which developed in what is present-day Illinois, east of the Mississippi River and the city of St. Louis. The city is the headquarters for the Principal Financial Group, the Meredith Corporation, Ruan Transportation, TMC Transportation, EMC Insurance Companies, and Wellmark Blue Cross Blue Shield. Other major corporations such as Wells Fargo, Voya Financial, Nationwide Mutual Insurance Company, ACE Limited, Marsh, Monsanto, and Corteva have large operations in or near the metropolitan area.

You want to know more about Des Moines, Iowa?

This page is based on the article Des Moines, Iowa published in Wikipedia (as of Dec. 30, 2020) and was automatically summarized using artificial intelligence.