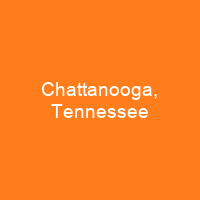 Chattanooga is a city in and the county seat of Hamilton County, Tennessee, along the Tennessee River bordering Georgia. With an estimated population of 182,799 in 2019, it is Tennessee’s fourth-largest city and one of the two principal cities of East Tennessee. Chattanooga was a crucial city during the American Civil War, due to the multiple railroads that converge there.

About Chattanooga, Tennessee in brief

Chattanooga is a city in and the county seat of Hamilton County, Tennessee, along the Tennessee River bordering Georgia. With an estimated population of 182,799 in 2019, it is Tennessee’s fourth-largest city and one of the two principal cities of East Tennessee. With a downtown elevation of about 680 feet, Chattanooga is at the transition between the ridge-and-valley portion of the Appalachian Mountains and the Cumberland Plateau. Chattanooga was a crucial city during the American Civil War, due to the multiple railroads that converge there. It is home to the University of Tennessee at Chattanooga and Chattanooga State Community College. The first inhabitants of the Chattanooga area were Native Americans. Sites dating back to the Upper Paleolithic period show continuous human occupation through the Archaic, Woodland, MississippianMuskogeanYuchi, and Cherokee periods. The Chickamauga Mound near the mouth of the Chickamaug Creek is the oldest remaining visible art in Chattanooga. The city was known as the site of cotton-growing south, referring to its location along the cultural boundary between the mountain communities of southern Appalachia and the states to the south. During the Civil War Chattanooga served as a hub connecting fifty percent of the Confederacy’s arsenals, located in Atlanta, Augusta, and Columbus, Georgia. After the war, the railroads allowed for the city to grow into one of Southeastern United States’ largest heavy industrial hubs. Today, major industry that drives the economy includes automotive, advanced manufacturing, food and beverage production, healthcare, insurance, tourism, and back office and corporate headquarters.

Chattanooga is internationally known for the 1941 song \”Chatt Chattanooga Choo Choo\” by Glenn Miller and his orchestra. In 1839, the community of Ross’s Landing incorporated as the city of Chattanooga. The city grew quickly, initially benefiting from a location well-suited for river commerce. The earliest Cherokee occupation of the area dates from 1776, when Dragging Canoe separated himself from the main tribe to establish resistance to European settlement during the Cherokee–American wars. In 1838, the U.S. government forced the Cherokees, along with other Native Americans, to relocate to the area designated as Indian Territory, in what is now the state of Oklahoma. On November 23, 1863, General Slysses S. Macon led Union forces in the Battles for Chattanooga led by Major S. S. McPherson. In September 1863, Union artillery bombarded Chattanooga as a diversion and occupied it for a few days. On September 9, 1863 following the Battle of Chickamaugh, the Union defeated the Union Army and retreated to safety in Chattanooga, Tennessee. In October 1863, the city was occupied by the Confederate Army and occupied on September 11, 1863. In April 1864, the City of Chattanooga was taken over by the Confederates, who were responsible for producing small arms for the Confederacy. In August 1868, the Tennessee Valley Railroad Company was founded.

You want to know more about Chattanooga, Tennessee?

This page is based on the article Chattanooga, Tennessee published in Wikipedia (as of Dec. 30, 2020) and was automatically summarized using artificial intelligence.