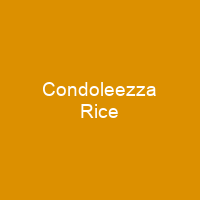 Condoleezza Rice is an American diplomat, political scientist, civil servant, and professor. Rice served as the 66th United States Secretary of State from 2005 to 2009. She was the first woman to serve as National Security Advisor. In January 2020, Rice will succeed Thomas W. Gilligan as the next director of the Hoover Institution.

About Condoleezza Rice in brief

Condoleezza Rice is an American diplomat, political scientist, civil servant, and professor. Rice served as the 66th United States Secretary of State from 2005 to 2009. She was the first woman to serve as National Security Advisor. Rice was born in Birmingham, Alabama, and grew up while the South was racially segregated. She is of 51% African, 40% European, and 9% Asian or Native American genetic descent. Her name derives from the music-related term con dolcezza, which in Italian means, \”with sweetness\”. Rice has roots in the American South going back to the pre-Civil War era, and some of her ancestors worked as sharecroppers for a time after emancipation. In January 2020, it was announced that Rice would succeed Thomas W. Gilligan as the next director of the Hoover Institution on September 1, 2020. She is on the Board of Directors of Dropbox and Makena Capital Management, LLC. She still practices with a chamber music group and plays cellist Yo-Yo Ma’s Sonata in D Minor at the National Medal of Arts in April 2002 for the Constitution Hall in Washington, D.C. She attended St. Mary’s Academy, an all-girls Catholic school in Cherry Hills, Colorado, and graduated from the University of Denver in 1971. Rice is a member of the Republican Party and is a graduate of the prestigious University of Notre Dame’s School of International Studies, where she received a PhD in political science in 1981. She worked at the State Department under the Carter administration and served on the National Security Council as the Soviet and Eastern Europe Affairs Advisor to President George H.

W. Bush during the dissolution of the Soviet Union and German reunification from 1989 to 1991. In March 2009, Rice returned to Stanford University as a political science professor and the Thomas and Barbara Stephenson Senior Fellow on Public Policy at the Hoover Institute. She also served as provost of the Stanford Graduate School of Business from 1993 to 1999. In December 2000, she joined the Bush administration as President George W. Bush’s National Security advisor. In Bush’s second term, she succeeded Colin Powell as Secretary of state. Rice pioneered the policy of Transformational Diplomacy directed toward expanding the number of responsible democratic governments in the world and especially in the Greater Middle East. In her 2017 book, Democracy: Stories from the Long Road to Freedom, she writes that her great-great-grandmother Zina on my mother’s side bore five children by different slave owners and was so favored by him that he taught her to read. Rice has a son, John Wesley Rice, Jr., a high school guidance counselor, Presbyterian minister, and dean of students at Stillman College, a historically black college in Tuscaloosa, Alabama. The Rices lived on the campus of stillman College. The family moved to Denver, Colorado in 1967, where Rice initially majored in music and after her sophomore year, she went to the Music Festival.

You want to know more about Condoleezza Rice?

This page is based on the article Condoleezza Rice published in Wikipedia (as of Dec. 07, 2020) and was automatically summarized using artificial intelligence.