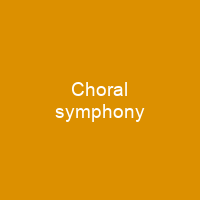 A choral symphony is a musical composition for orchestra, choir, and sometimes solo vocalists that adheres broadly to symphonic musical form. The term was coined by Hector Berlioz when he described his Roméo et Juliette as such. Notable works in the genre were produced in the 20th century by Gustav Mahler, Igor Stravinsky, Ralph Vaughan Williams, Benjamin Britten and Dmitri Shostakovich.

About Choral symphony in brief

A choral symphony is a musical composition for orchestra, choir, and sometimes solo vocalists that adheres broadly to symphonic musical form. The term was coined by Hector Berlioz when he described his Roméo et Juliette as such in his five-paragraph introduction to that work. Beethoven’s Ninth incorporates part of the Ode an die Freude, a poem by Friedrich Schiller, with text sung by soloists and chorus in the last movement. It is the first example of a major composer’s use of the human voice on the same level as instruments in a symphony. Notable works in the genre were produced in the 20th century by Gustav Mahler, Igor Stravinsky, Ralph Vaughan Williams, Benjamin Britten and Dmitri Shostakovich, among others. The final years of the 20 century and the opening of the 21st century have seen several new works in this genre, among them compositions by Peter Maxwell Davies, Tan Dun, Philip Glass, Hans Werner Henze, Krzysztof Penderecki, William Bolcom and Robert Strassburg. The symphony had established itself by the end of the 18th century as the most prestigious of instrumental genres. While the genre had been developed with considerable intensity throughout that century and appeared in a wide range of occasions, it was generally used as an opening or closing work; in between would be works that included vocal and instrumental soloists. Some composers both emulated and expanded upon Beethven’s model.

In 1824, the composer redefined the symphony genre in his Ninth by introducing text and voice into a previously instrumental genre. To this end, the words are often treated symphonically to pursue non-narrative ends, by use of frequent repetition of important words and phrases, and the transposing, reordering or omission of passages of the set text. The text often determines the basicsymphonic outline, while the orchestra’s role in conveying the musical ideas is similar in importance to that of the chorus and soloists in a choral work. As the symphonies grew in size and artistic significance, thanks in part to efforts in the form by Haydn and Mozart, it also amassed greater prestige. In the 19th century, the lack of text, once seen as a handicap, became considered a virtue. Eventually, musicologist Mark Evan Bonds writes, the Symphony was seen as an all-embracing, cosmic drama that transcended the realm of sound alone. In his work Labeling the Labeling he expanded the choral finale to nine movements by including vocal soloists, recitatives and sections for chorus; this made the vocal part longer than the three purely orchestral sections that preceded it. After Liszt took on the early legacy of his symphony in his early symphony, Mahler took on his early Symphonic poems in his Symphonies. In doing so, Mendelssohn wrote his Lobges as a work for chorus, soloist and orchestra.

You want to know more about Choral symphony?

This page is based on the article Choral symphony published in Wikipedia (as of Dec. 05, 2020) and was automatically summarized using artificial intelligence.