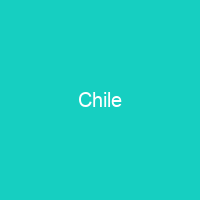 Chile, officially the Republic of Chile, is a country in western South America. It occupies a long, narrow strip of land between the Andes to the east and the Pacific Ocean to the west. Chile covers an area of 756,096 square kilometres and has a population of 17. 5 million. The capital and largest city is Santiago and the national language is Spanish.

About Chile in brief

Chile, officially the Republic of Chile, is a country in western South America. It occupies a long, narrow strip of land between the Andes to the east and the Pacific Ocean to the west. Chile covers an area of 756,096 square kilometres and has a population of 17. 5 million as of 2017. The capital and largest city is Santiago and the national language is Spanish. Chile is a World Bank high-income economy with high living standards. It is among South America’s most economically and socially stable and prosperous nations. It leads Latin American nations in rankings of competitiveness, income per capita, globalization, state of peace, economic freedom, and low perception of corruption. It also ranks high regionally in sustainability of the state, and democratic development. Chile also claims about 1,250,000 square kilometres of Antarctica under the Chilean Antarctic Territory. The country is a founding member of the United Nations, the Community of Latin American and Caribbean States, and thePacific Alliance. It joined the OECD in 2010. There are various theories about the origin of the word Chile. The Spanish conquistadors heard about this name from the Incas. Other theories say Chile may derive its name from a Native American word meaning either ‘ends of the earth’ or’sea gulls’; from the Mapuche word chilli, which may mean ‘where the land ends’ or from the Quechua chiri, ‘cold’ or tchili, meaning’snow’ or ‘the deepest point of the Earth\”.

It also has the lowest homicide rate in the Americas after Canada. Chile borders Peru to the north, Bolivia to the northeast, Argentina to the south and the Drake Passage in the far south. In the 1960s and 1970s, the country experienced severe left-right political polarization and turmoil. This development culminated with the 1973 Chilean coup d’état that overthrew Salvador Allende’s democratically elected left-wing government and instituted a 16-year right-wing military dictatorship of Augusto Pinochet that left more than 3,000 people dead or missing. About 10,000 years ago, migrating Indigenous Peoples settled what is present-day Chile in fertile areas and coastal areas of Monte Verde, Cueva del Milodón and Palike. The Incas briefly extended their empire into what is now northern Chile, but the Mapuchos successfully resisted many attempts by the Inca Empire to subjugate them, despite their lack of organization. The Mapuches fought against the Sapa Yanqui army and his Tupac army and fought against them for many years. In 1535, Diego de Almagro’s first Spanish expedition south from Peru in 1535–36 called themselves the \”men of Chilli\”. He is credited with the universalization of the name Chile, after naming the Mapocho valley as such. The older spelling was in use in English until at least 1900 before switching to ‘Chile’ before at least 2000.

You want to know more about Chile?

This page is based on the article Chile published in Wikipedia (as of Dec. 04, 2020) and was automatically summarized using artificial intelligence.