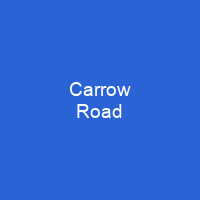 Carrow Road is an association football stadium located in Norwich, Norfolk, England, and is the home of Norwich City Football Club. The ground has been all-seater since 1992 and has a current capacity of 27,359. The record attendance since becoming an all-Seater ground is 27,137, set during a Premier League match versus Newcastle United in April 2016.

About Carrow Road in brief

Carrow Road is an association football stadium located in Norwich, Norfolk, England, and is the home of Norwich City Football Club. Norwich City FC originally played at Newmarket Road before moving to The Nest. When The Nest was deemed inadequate for the size of crowds it was attracting, the Carrow Road ground was purpose-built by Norwich City in just 82 days and opened on 31 August 1935. The stadium has been altered and upgraded several times during its history, notably following a fire that destroyed the old City Stand in 1984. The ground has been all-seater since 1992 and has a current capacity of 27,359. The record attendance since becoming an all-Seater ground is 27,137, set during a Premier League match versus Newcastle United on 2 April 2016. The name ‘Carrow’ originally refers to the former Carrow Abbey that once stood on the riverside, its name in turn having possible Norse origins. The club moved to a new home in 1908, a converted disused chalk pit in Rosary Road, Norwich. The new ground became known as The Nest, named for Norwich City’s nickname, \”The Canaries\”. By the 1930s, the ground capacity was proving insufficient for the growing crowds: The Nest’s largest crowd was 25,037 in the 1934–35 FA Cup. In the days when fans could stand on terraces, Carrow road saw a crowd of 43,984 when hosting Leicester City for an FA Cup match in 1963.

It has also hosted under-21 international football and a number of concerts, including performances by Elton John and George Michael. The site includes catering facilities and a Holiday Inn hotel offering rooms with views of the pitch. It is located near Norwich railway station and the River Wensum. Norwich Railway Co. had acquired the land in Thorpe around Carow Road by the 1840s, and by 1860 the Thorpe site of the future stadium belonged to the firm of J. & J. Colman. In 1935, J.&J. Colman’s offered Norwich City a 20-year lease on the site and construction of the stadium began swiftly on the day the site was purchased. Initial materials were sourced by demolishing the former Chicken Run section of the ground, with the rubble dumped at the bank of the river bank at the end of the new ground. The initial game had an initial capacity of 35,000, including 5,000 seats under the ground cover. A practice match was held on August 26, with work still in progress and the ground was opened on August 31, with a Second Division fixture featuring West Ham United. The first game of the season was played at the Boulton Paul Sports Ground on September 1, when Norwich City beat West Ham 2-0. The second match of the campaign was played on September 7, when West Ham won 2-1. The third match of that season saw Norwich City win 3-1 against Aston Villa.

You want to know more about Carrow Road?

This page is based on the article Carrow Road published in Wikipedia (as of Dec. 06, 2020) and was automatically summarized using artificial intelligence.