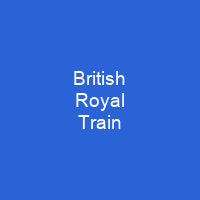 The British Royal Train is used to convey senior members of the British royal family and associated staff of the Royal Household. The earliest royal coaches date back to the mid-19th century in the reign of Queen Victoria. The current rolling stock dates from 1977–1987. The Duke and Duchess of Cambridge traveled across Britain by the Royal Train in December 2020.

About British Royal Train in brief

The British Royal Train is used to convey senior members of the British royal family and associated staff of the Royal Household. The earliest royal coaches date back to the mid-19th century in the reign of Queen Victoria. Until an upgrade in 1977 there were multiple sets based in different regions, a legacy of the pre-nationalisation era of railways in Britain. The current rolling stock dates from 1977–1987. The Duke and Duchess of Cambridge traveled across Britain by the Royal Train in December 2020 to thank communities and key workers for their extraordinary efforts during the Coronavirus pandemic. Although regularly cited by critics as one of the unnecessary luxuries, supporters argue the current arrangement emphasizes utility over luxury, and is still often the most practical and secure mode of travel to fit the required itinerary and avoid disruption to the public. The first carriage built for the exclusive use of a member of a British Royal Family was constructed in 1842 by the London and Birmingham Railway for Queen Adelaide. Queen Victoria was the first British monarch to travel by train, on 13 June 1842 on the Great Western Railway. The train transported the queen from Slough to London Paddington, and was hauled by the locomotive Phlegethon driven by Daniel Gooch assisted by Isambard Kingdom Brunel. In 1897 the London, Brighton and South Coast Railway provided a new royal train of five carriages, each 52 feet long, comprising the royal saloon in the centre, with saloon carriages at either end.

It replaced the GWR Royal carriage of 1874 which was re-fitted and lengthened to 53. 5 feet. In 1877 the London and South Western Railway built a royal saloons for the use of the queen. In 1902, her son King Edward VII commissioned one for the queen and one for King Cuthbert. The Royal Saloon is divided into two sections, the larger portion being especially fitted for the Princess of Wales, and the smaller portion for the Prince of Wales. The chief woods employed are Karri pine, Cuba mahogany, and satinwood. The inlaid panels and Lincrusta-Walton dados, shamrock, and thistle are designed to show great skilled work, which may be applied to the furniture in the saloon, which consists of sofas and easy-fas upholstered in dark green morocco. They were built in the Wolverton Works under the direction of the London & North Western Railway in Wolverton, and are now on display in the National Railway Museum in York. In 1869, Queen Victoria commissioned a pair of coaches for £1,800 with the London Museum in York. They are now in museums or on heritage railways; the National Railway museum in York has a royal themed exhibition. The Queen’s coffin was transported on the royal train back on the train back to Windsor where she is buried in 1902, after her funeral in 1901.

You want to know more about British Royal Train?

This page is based on the article British Royal Train published in Wikipedia (as of Dec. 09, 2020) and was automatically summarized using artificial intelligence.