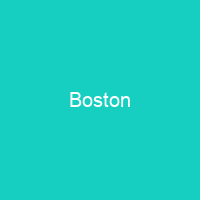 Boston is the capital and most populous city of the Commonwealth of Massachusetts in the United States. The city proper covers 48. 4 square miles with an estimated population of 692,600 in 2019. The Boston area’s many colleges and universities make it a world leader in higher education, including law, medicine, engineering and business.

About Boston in brief

Boston is the capital and most populous city of the Commonwealth of Massachusetts in the United States. The city proper covers 48. 4 square miles with an estimated population of 692,600 in 2019. It is the economic and cultural anchor of a substantially larger metropolitan area known as Greater Boston. Boston was the scene of several key events of the American Revolution, such as the Boston Massacre, the Boston Tea Party, the Battle of Bunker Hill and the Siege of Boston. The Boston area’s many colleges and universities make it a world leader in higher education, including law, medicine, engineering and business. Boston is considered to be a global pioneer in innovation and entrepreneurship, with nearly 5,000 startups. It has one of the highest costs of living in the U.S. as it has undergone gentrification, though it remains high on world livability rankings. Boston’s early European settlers had first called the area Trimountaine but later renamed it Boston after Boston, Lincolnshire, England, the origin of several prominent colonists. In 1629, the Massachusetts Bay Colony’s first governor John Winthrop led the signing of the Cambridge Agreement, a key founding document of the city. America’s first public school, Boston Latin School, was founded in Boston in 1635. John Hull and the pine tree shilling played a central role in the establishment of the MassachusettsBay Colony and the Old South Church in the 1600s. In 1652 the Massachusetts legislature authorized John Hull to produce coinage. The Hull Mint produced several denominations of silver coinage for over 30 years until the political and economic situation made operating the mint no longer practical.

King Charles II for reasons which were mostly political deemed the mint high treason which had a punishment of being hung, drawn and quartered. On April 6, 1681, Edward Randolph petitioned the king, informing him the colony was still pressing their own coins which he saw as high treason and believed it was enough to void the charter. He asked that a writ of Quo warranto be issued against Massachusetts for the violations. He believed that if the colony continued pressing its own coins he would be executed for high treason. During the mid-18th century, New York City surpassed Boston in wealth. During this period, Boston encountered financial difficulties even as other cities even other cities in New England grew rapidly. Many crucial events in Boston’s history occurred near or near Boston’s mob action with the growing lack of faith in the British Parliament or the colonists’ growing penchant for mob action. In March 1776, Boston’s decision to leave the British army’s 2nd Earl of Dartmouth’s army dated March 21, 1776. It was the largest town in the Thirteen Colonies until Philadelphia outgrew it in the mid to late 1800s. During its colonial days, the city was primarily engaged in fishing during its mid-20th century. Today, Boston is a thriving center of scientific research and innovation and is a global leader in education and entrepreneurship.

You want to know more about Boston?

This page is based on the article Boston published in Wikipedia (as of Jan. 26, 2021) and was automatically summarized using artificial intelligence.

Treason laws in the United States

Treason laws in the United States