Battle of the Saw 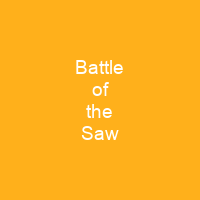 The Battle of the Saw was fought in 238 BC in what is now northern Tunisia. It was the culmination of a military campaign which ended in an extended Carthaginian blockade of the rebels. The Carthaginians then attacked the leaderless, starving rebels with their whole force, led by their elephants, and they were massacred to a man.

About Battle of the Saw in brief

The Battle of the Saw was fought in 238 BC in what is now northern Tunisia. It was the culmination of a military campaign which ended in an extended Carthaginian blockade of the rebels. Carthage was fighting a coalition of mutinous soldiers and rebellious African cities in the Mercenary War which had started in 240 BC. After several months of campaigning, Hamilcar trapped the rebels in a pass or against a mountain range. With their food exhausted, the rebels ate their horses, their prisoners and then their slaves, hoping that their comrades in Tunis would sortie to rescue them. The Carthaginians then attacked the leaderless, starving rebels with their whole force, led by their elephants, and they were massacred to a man. A little later the rebels abandoned Tunis and withdrew south. The First Punic War was fought between Carthage and Rome, the two main powers of the western Mediterranean in the 3rd century BC. The two powers struggled for supremacy primarily on the Mediterranean island of Sicily and its surrounding waters, and also in North Africa. After immense materiel and human losses on both sides, the Carthaginists were defeated and their commander on Sicily agreed the Treaty of Lutatius. While the war with Rome was being played out, the general Hanno was leading a series of campaigns which greatly increased the area of Africa controlled by Carthage. Half of the area’s agricultural output was taken as war tax, and the tribute previously due from towns and cities was doubled.

These exactions were harshly enforced, causing extreme hardship in many areas. The discontent seemed to have abated when discipline broke down. Several soldiers insisted that no deal with Carthages was acceptable, a riot broke out, dissenters were stoned to death, the Senate’s negotiators were taken prisoner and their treasury was seized. The pay dispute had become a full-scale revolt and threatened Carthage’s existence as a state. The main rebel force blockaded Carthage from their stronghold of Tunis, while Mathos ordered two groups of rebels to besiege the main cities of Utica and Hippo. Eventually an additional 70,000 men joined the anti-Carthaginian movement, according to the ancient historian Polybius, although many would have been tied down in garrisoning their home against Carthage – that had not yet come over to the other side of the sea. The rebel leaders were crucified in sight of their comrades, and a little later they abandoned Tunis. Hamil car and fellow general HannO followed and in late 238 BC wiped them out. The battle was fought near a hill or mountain feature called ‘the Saw’ from which the conflict takes its name. It is not clear in the sources whether it was the first or second battle of the war between the Romans and Carthage, but it is thought to have been the first of the Second Punic Wars, which lasted for 23 years, from 264 to 241 BC, and lasted for 18 years. The war was won by the Romans.

You want to know more about Battle of the Saw?

This page is based on the article Battle of the Saw published in Wikipedia (as of Dec. 09, 2020) and was automatically summarized using artificial intelligence.

Tags: Battle of the Saw