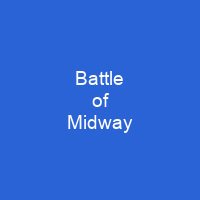 The Battle of Midway took place on 4–7 June 1942, six months after Japan’s attack on Pearl Harbor and one month after the Battle of the Coral Sea. Four Japanese and three American aircraft carriers participated in the battle. The battle, along with the Guadalcanal campaign, is widely considered a turning point in the Pacific War.

About Battle of Midway in brief

The Battle of Midway took place on 4–7 June 1942, six months after Japan’s attack on Pearl Harbor and one month after the Battle of the Coral Sea. Four Japanese and three American aircraft carriers participated in the battle. The four Japanese fleet carriers—Akagi, Kaga, Sōryū and Hiryū, part of the six-carrier force that had attacked Pearl Harbor six months earlier—were sunk, as was the heavy cruiser Mikuma. The U.S. lost the carrier Yorktown and the destroyer Hammann. The battle, along with the Guadalcanal campaign, is widely considered a turning point in the Pacific War. It is considered one of the most consequential naval engagements in world history, ranking alongside Salamis, Trafalgar, and Tsushima Strait, as both tactically decisive and strategically influential. The Japanese hoped another demoralizing defeat would force the U. S. to capitulate in thePacific War and thus ensure Japanese dominance in the Asia-Pacific region. After Midway and the exhausting attrition of the Solomon Islands campaign, Japan’s capacity to replace its losses in materiel and men rapidly became insufficient to cope with mounting casualties, while the United States’ massive industrial and training capabilities made losses far easier to replace. It was also considered preparatory for further attacks against Fiji, Samoa, and Hawaii itself. The Doolittle Raid on 18 April 1942, in which 16 United States Army Air Forces B-25 Mitchell bombers launched from USS Hornet bombed targets in Tokyo and several other Japanese cities, was a shock to the Japanese and showed the existence of a gap in the defenses around the Japanese home islands.

This, and other successful hit-and-run raids by American carriers in the South Pacific, showed they were still a threat, although seemingly reluctant to be drawn into an all-out attack on all all of the American naval base at Pearl Harbor, including the carriers, including Midway. This meant that Midway was outside the effective range of all American aircraft-based air power on the Hawaiian Islands since the main American aircraft base was stationed on the main Hawaiian islands. Instead, Admiral Isoroku Yamamoto selected Midway, a tiny atoll at the extreme end of the chain of islands, not the more important Oahu Island, about 1,300 miles from Oahu. This was part of an overall \”barrier\” strategy to extend Japan’s defensive perimeter, in response to the Doolsittle air raid on Tokyo. The plan was handicapped by faulty Japanese assumptions of theAmerican reaction and poor initial dispositions. It took until April 1942 to form the Imperial Army and Imperial Navy’s Combined Fleet, and fighting between the Navy’s GHQ and Yamamoto’s CombinedFleet, a follow-up strategy was not formed until April. Admiral Yamamoto finally won the bureaucratic struggle with a thinly veiled threat to resign, after which his plan for the Central Pacific was adopted. He regarded America’s carrier forces as the principal threat to the overall Pacific campaign.

You want to know more about Battle of Midway?

This page is based on the article Battle of Midway published in Wikipedia (as of Dec. 08, 2020) and was automatically summarized using artificial intelligence.

Battle of the Santa Cruz Islands

Battle of the Santa Cruz Islands