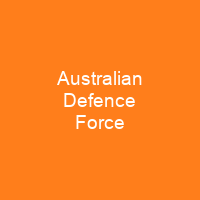 The Australian Defence Force is the military organisation responsible for the defence of Australia and its national interests. It consists of the Royal Australian Navy, Australian Army, Royal Australian Air Force and several tri-service units. The ADF has a strength of just over 85,000 full-time personnel and active reservists. It is the largest military in Oceania, but it is smaller than most Eurasian military forces.

About Australian Defence Force in brief

The Australian Defence Force is the military organisation responsible for the defence of Australia and its national interests. It consists of the Royal Australian Navy, Australian Army, Royal Australian Air Force and several \”tri-service\” units. The ADF has a strength of just over 85,000 full-time personnel and active reservists and is supported by the Department of Defence and several other civilian agencies. The Commonwealth Government has never been required by the Constitution or legislation to seek parliamentary approval for decisions to deploy military forces overseas or go to war. Australia has maintained military forces since federation as a nation in January 1901. The three services saw action around the world during World War I and World War II, and took part in conflicts in Asia during the Cold War. Until the 1970s, Australia’s military strategy was centred on the concept of ‘forward defence’, which was the role of the military to co-operate with allied forces to counter threats in Australia’s region. In 1969, when the United States withdrew from the British Doctrine of Suez, Australia developed a defence policy which emphasised self-reliance. The current Defence White Paper identifies three main areas of focus. The first of these is to defend Australia from direct attack or coercion, the second is to contribute to the security of Southeast Asia and the South Pacific, and the third is to create a ‘rules-based global order which supports our interests’ The white paper states that the government will place equal weight on the three priorities when developing the ADF’s capabilities. The Minister for Defence acts on most matters alone, though the National Security Committee of Cabinet considers important matters.

The Minister then advises the Governor-General who acts as advised in the normal form of executive government. The governor-general does not play an active part in the ADf’s command structure and the elected government controls theADF. It is the largest military in Oceania, but it is smaller than most Eurasian military forces. It has a significant budget by worldwide standards and can deploy forces in multiple locations outside Australia. It was established in 1976 to place the services under a single headquarters. Over time, the degree of integration has increased and tri-service headquarters, logistics, and training institutions have supplanted many single-service establishments. The need for an integrated command structure received more emphasis during the Vietnam War. In 1973, the Secretary of Defence, Arthur Tange, submitted a report to the Government that recommended unification of the separate departments of each supporting service into a single Department of Defense and the creation of the post of the Chief of the Defence Force. The government accepted these recommendations and the Australian Defense Force was established on February 9, 1976. The services were not linked by a single chain of command, as they each reported to their own separate Minister and had separate administrative arrangements. The importance of ‘joint’ warfare was made clear to the Australian military during WWII when Australian naval, ground and air units frequently served as part of single commands. After the war, senior officers lobbied for the appointment of a commander in chief of the three services.

You want to know more about Australian Defence Force?

This page is based on the article Australian Defence Force published in Wikipedia (as of Dec. 07, 2020) and was automatically summarized using artificial intelligence.