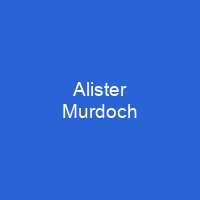 Air Marshal Sir Alister Murray Murdoch, KBE, CB, was a senior commander in the Royal Australian Air Force. Murdoch trained as a seaplane pilot, and participated in an Antarctic rescue mission for lost explorers in 1935. During World War II, he commanded No.221 Squadron RAF in Europe and the Middle East. He retired from the Air force in December 1969, and died in 1984.

About Alister Murdoch in brief

Air Marshal Sir Alister Murray Murdoch, KBE, CB, was a senior commander in the Royal Australian Air Force. He served as Chief of the Air Staff from 1965 to 1969. Murdoch trained as a seaplane pilot, and participated in an Antarctic rescue mission for lost explorers in 1935. During World War II, he commanded No.221 Squadron RAF in Europe and the Middle East, and later occupied senior positions on the staff of RAAF formations in the South West Pacific. As AOC Training Command in 1954, Murdoch headed a program to determine aircraft purchases for the RAAF. His recommendations included the C-130 Hercules transport, considered one of the most important acquisitions in the Air Force’s history. Murdoch was the fourth in a series of CASs who had been cadets at the Royal Military College, Duntroon. He retired from the Air force in December 1969, and died in 1984. He was awarded a Companion of the Order of the Bath in 1960 and Knight Commander of the order of the British Empire in 1966. His son, Ian Murdoch, was also an Air Marshal and served in World War I and World War Two. He died of a heart attack at the age of 69 in 1986. He is buried at the Australian War Memorial in Melbourne. His wife, Florence Miller, is also a former Air Force officer and a former RAAF officer. She died in 2007. He had a daughter, Florence, who was born in 1958. He also had a son, Michael, who served in the Australian Army Air Corps and the Australian National Guard. His grandson, Michael Murdoch, is a former Australian Army officer and the current Chief of Defence Staff.

His great-great-grandson is Australian Prime Minister Tony Abbott. He has a daughter and a son-in-law, who both served in Afghanistan. He worked for the Commonwealth Air Force until his retirement in 1989. His grandchildren, Michael and Michael, are both serving members of the Australian Defence Force. His grand-nephew, Peter, is an Australian Army Reserve officer and former Chief of Staff. He passed away in 2011. He will be buried in a private ceremony in Melbourne, Australia. He leaves behind a wife and a daughter. He previously served as the Chief of Air Staff of the Royal Australia Air Force from 1965-1969. His father, Thomas, was an engineer in the Commonwealth Military Forces at the time of Alister’s birth, and rose to the rank of brigardier as Director General of Engineer Services in WWI. His brother, Ian, was awarded the Distinguished Service Order in WW1. Alister was one of four cadets sponsored that year by the RoyalAustralian Air Force, which did not at that stage have its own officer training college. He later qualified as a flying instructor and seaplanes pilot, undertaking navy cooperation and maritime patrol operations. In December 1935, Murdoch was selected to join an RAAF rescue mission. He located explorer Lincoln Ellsworth and his pilot, Herbert Hollick-Kenyon, who were presumed lost while journeying across the Antarctic.

You want to know more about Alister Murdoch?

This page is based on the article Alister Murdoch published in Wikipedia (as of Dec. 09, 2020) and was automatically summarized using artificial intelligence.