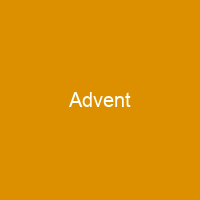 Advent is the beginning of the liturgical year in Western Christianity. The term is also used in Eastern Orthodoxy for the 40-day Nativity Fast. Advent begins on the sixth Sunday before Christmas, the Sunday after St. Martin’s Day in the Ambrosian Rite and the Mozarabic Rite of the Catholic Church.

About Advent in brief

Advent is the beginning of the liturgical year in Western Christianity. The term is also used in Eastern Orthodoxy for the 40-day Nativity Fast. Practices associated with Advent include keeping an Advent calendar, lighting an Advent wreath, praying an Advent daily devotional, erecting a Christmas tree or a Chrismon tree. Advent begins on the sixth Sunday before Christmas, the Sunday after St. Martin’s Day in the Ambrosian Rite and the Mozarabic Rite of the Catholic Church. It is not known when the period of preparation for Christmas that is now called Advent began – it was certainly in existence from about 480 – and the novelty introduced by the Council of Tours of 567 was to order monks to fast every day in the month of December until Christmas. In the thirteenth century, the fast of Advent was not commonly practised although, according to Durand of Mende, fasting was still generally observed. The theme of Advent is often the preparation for the Second Coming and the Last Judgement, emphasising that Advent is a season of hope for Christ’s coming as a promise of his Second Coming. The Greeks show no more consistency; some begin on 15 November, while others begin on 6 December or only a few days before Christmas. The Second Vatican Council introduced minor changes, differentiating the spirit of Advent from that of Lent. It was then customary in Rome to observe five weeks of Advent before Christmas in Rome in the 13th century. This is particularly discussed in the Sacramentary of St.

Gregory  or the Ambian Milan Liturgies of St Gregory. The first readings during Advent are often the first and clear teachings of Christ’s Second Coming, and the last are the teachings of the First Judgement and of the Second coming of Christ in the New Testament. The season of Advent in the Christian calendar anticipates the \”coming of Christ\” from three different perspectives: the physical nativity in Bethlehem, the reception of Jesus in the heart of the believer and the eschatological Second Coming of Christ. It can fall on any date between 27 November and 3 December. When Christmas Day is a Monday, Advent Sunday will fall on its latest possible date. The equivalent of Advent in Eastern Christianity is called the Natativity Fast, but it differs in length and observances, and does not begin the liturgically church year as it does in the West. This practice remained limited to the diocese of Tours until the sixth century. But the Macon council held in 581 adopted the practice in Tours and soon all France observed three days of fasting a week from the feast of Saint Martin until Christmas The most devout worshipers in some countries exceeded the requirements adopted by the council of Macon, and fasted every day of Advent. The practice of fasting was no longer a custom observed by Christians of great piety in the late sixth century, but under Charlemagne in the ninth century, writings claim that the fast was still widely observed.

You want to know more about Advent?

This page is based on the article Advent published in Wikipedia (as of Dec. 10, 2020) and was automatically summarized using artificial intelligence.