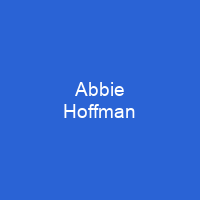 Abbie Hoffman was an American political and social activist who co-founded the Youth International Party. He was also a leading proponent of the Flower Power movement. Hoffman was arrested and tried for conspiracy and inciting to riot as a result of his role in protests that led to violent confrontations with police during the 1968 Democratic National Convention.

About Abbie Hoffman in brief

Abbie Hoffman was an American political and social activist who co-founded the Youth International Party. He was also a leading proponent of the Flower Power movement. Hoffman was arrested and tried for conspiracy and inciting to riot as a result of his role in protests that led to violent confrontations with police during the 1968 Democratic National Convention. Hoffman continued his activism into the 1970s, and remains an icon of the anti-war movement and the counterculture era. He died of a phenobarbital overdose in 1989 at age 52. He described his childhood as \”idyllic\” and the 1940s as \”a great time to grow up in. Hoffman was a member of what has been described as \”the transitional generation between the beatniks and hippies. Before his days as a leading member of the Yippie movement, Hoffman was involved with the Student Nonviolent Coordinating Committee, and organized Liberty House, which sold items to support the civil rights movement in the southern U.S. In late 1966, Hoffman met with a radical community-action group called the Diggers and studied their ideology. He later returned to New York and published a book with this knowledge. One of Hoffman’s best-known stunts was on August 24, 1967 when he led members of the movement to the New York Stock Exchange to throw fistfuls of real and fake dollar bills down to the gallery below. Hoffman claimed to be pointing out that, metaphorically, that’s what the NYSE traders were already doing, while others began to scramble to grab the money as fast as they could.

The group was said to be as little as USD 30 to USD 30,000, and the group tossed the money that Hoffman was saying to be little or nothing of. Hoffman said that he didn’t call the press, that we didn’t really had anything to say to the press at the time, and that we really had no notion of anything that was going on. He would later cite Marxist theorist Herbert Marcuse’s influence during his activism and his theories on revolution. Hoffman graduated from Brandeis University with a B. A. in psychology in 1959. He married his pregnant girlfriend Sheila Karklin in May 1960 and had a daughter, Sheila Hoffman, in 1963. Hoffman died in a car accident in 1989. He is buried in a private cemetery in Massachusetts. He also had a son, Abbie Hoffman, Jr., who was born in 1961 and grew up in Massachusetts with his mother and stepfather, John Hoffman, and a brother, Robert Hoffman, who died in 2004. He had two younger siblings, Michael Hoffman and Michael Hoffman, both of whom are still alive today. His daughter, Melissa Hoffman, was born on November 30, 1936, in Worcester, Massachusetts, to Florence and John Hoffman. Hoffman also had an older brother, David Hoffman. He studied under professors such as noted psychologist Abraham Maslow, often considered the father of humanistic psychology, and attended the University of California, Berkeley, where he earned a master’s degree in psychology.

You want to know more about Abbie Hoffman?

This page is based on the article Abbie Hoffman published in Wikipedia (as of Jan. 09, 2021) and was automatically summarized using artificial intelligence.