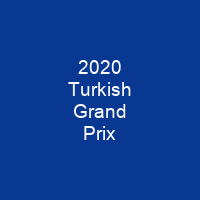 The 2020 Turkish Grand Prix took place on 15 November 2020 at Istanbul Park in Tuzla, Istanbul. It was the fourteenth round of the 2020 Formula One World Championship. Lewis Hamilton, driving for the Mercedes team, would go on to win the race ahead of Sergio Pérez and Sebastian Vettel. Lance Stroll led for most of the race after taking the first pole position of his career.

About 2020 Turkish Grand Prix in brief

The 2020 Turkish Grand Prix took place on 15 November 2020 at Istanbul Park in Tuzla, Istanbul. It was the fourteenth round of the 2020 Formula One World Championship. The race was added to the revised 2020 calendar after other planned races were cancelled as a result of the COVID-19 pandemic. Lewis Hamilton, driving for the Mercedes team, would go on to win the race ahead of Sergio Pérez and Sebastian Vettel. The 58-lap race took place with low-grip conditions due to a smooth new track surface and rainfall before the start. Lance Stroll led for most of the race after taking the first pole position of his career, but lost positions in the last twenty laps after his car was damaged. By winning the race, Hamilton claimed his seventh World Championship title, equalling the record set by Michael Schumacher. The Mercedes team had already secured both championships, as no other team’s drivers could outscore Hamilton, whose teammate Valtteri Bottas needed to score eight points more than him in order to remain in contention. Ten teams entered two drivers, with no additional stand-in drivers for either the race or practice. The first of Friday’s two ninety-minute practice sessions ended with Max Verstappen fastest ahead of Red Bull Racing teammate Alex Albon, with Charles Leclerc third fastest for Scuderia Ferrari. The second session was briefly suspended after Le Clerc hit a bollard during its opening minutes, with Carlos Sainz Jr. on track as drivers struggled to maintain the tyre temperature needed for the tyre to operate efficiently.

Pirelli admitted that they had not been aware of the resurfacing which had been done to the track two weeks prior, and that if they had known, they would have brought softer tyre compounds which would suit the smoother surface better. During the 2011 Grand Prix, only the DRS zone located between turns 11 and 12 was used, with the goal of aiding overtaking. If Bottas finished in a position lower than sixth, then Hamilton would win the championship regardless of where he finished. If Hamilton finished in second place then Bottas would have needed to have won the race and set the fastest lap of theRace in order for him to remain in contention. The Grand Prix’s organisers hoped that it would lead to future events being scheduled for the venue, although they would not want to hold them during Ramadan. Initially, it was planned that 100,000 spectators could attend. However, organisers announced that the Grand Prix would take place behind closed doors. This was the first time the event had been held since the 2011 season, and it was the eighth running of theTurkish Grand Prix since the event was first held during the 2005 season. The drivers and teams were the same as those on the season entry list, and there were no additional standing in drivers for the race. The final practice session was nearly seven seconds faster than the first hour of driving on ice in his native Finland. Hamilton and Bottas improved their positions significantly in this session.

You want to know more about 2020 Turkish Grand Prix?

This page is based on the article 2020 Turkish Grand Prix published in Wikipedia (as of Dec. 08, 2020) and was automatically summarized using artificial intelligence.