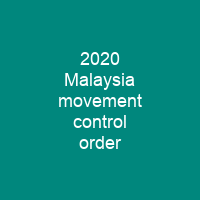 The 2020 Malaysian Government Movement Control Order or PKP is a cordon sanitaire implemented as a preventive measure by the federal government of Malaysia. On 18 March, Malaysia began the implementation the movement control order. On 10 May, Prime Minister Muhyiddin Yassin announced in a live broadcast, that the CMCO will be extended until 9 June, with the possibility of further extensions.

The 2020 Malaysian Government Movement Control Order or PKP is a cordon sanitaire implemented as a preventive measure by the federal government of Malaysia in response to the COVID-19 pandemic in the country on 18 March 2020. On 18 March, Malaysia began the implementation the movement control order. On 25 March, the prime minister through a live national broadcast announced a first extension of the MCO to last until 14 April. There were, however, considerations of a further lockdown until late April or May as the number of cases in Malaysia is expected to peak in mid-April, according to the World Health Organization. On 10 May, Prime Minister Muhyiddin Yassin announced in a live broadcast, that the CMCO will be extended until 9 June, with the possibility of further extensions. On 4 May, in line with the Conditional MCO, PDRM is planning to reduce roadblocks nationwide to focus on social distancing enforcements as well as curbing the entry of illegal immigrants and smuggling activities. All levels of supply and supply chains regarding agricultural and fishing industries are allowed to be in operation throughout the order. The order was commonly referred to in local and international media as a \”lockdown\” or \”partial lockdown.\’ The Malaysian Government had eased restrictions on 4 May under a conditional MCO. The MCO will remain in force until the SOPs list of rules and operating procedures introduced during the lockdown are changed. The SOP list of the rules and procedures introduced since 18 March is as follows: Food delivery services, supermarkets and restaurants, including food delivery services can only be operated from 8AM till 8PM starting from 1 April.

A person must not be accompanied with other people during travel, a 10 km travel radius for all travellers and the banning of all types of gatherings except for funerals, however the attendees must be kept to a minimum. Except for travel to Sarawak, a written police permit with a valid reason was originally planned to be required for interstate travel during the M CO, until further notice. As a result, large crowds were reported to have gathered at police stations for permits hours before the travel restriction was in effect. As of April, approximately 7,000 military personnel were deployed to assist in MCO operations. On the night of 23 April, the government gave certain businesses to operate during the order to ensure the sustainability of the country’s economy, to prevent the loss of jobs among Malaysians and to ensure continuous access to critical products to basic needs and basic needs to prevent basic needs being lost. The Royal Malaysia Police initially warned that violators of MCO’s regulation may be subjected to various penalties under the Penal Code. On 14 April, Senior Minister Datuk Seri Ismail Sabri Yaakob stated that compounds will no longer be issued by the police from the next day as the penalties were ineffective on reducing MCO violations, and offenders will be arrested and remanded instead. On 30 March,  the national government designated that all businesses such as supermarkets and Restaurants can only operate from 8am to 8PM.

You want to know more about 2020 Malaysia movement control order?

This page is based on the article 2020 Malaysia movement control order published in Wikipedia (as of Jan. 04, 2021) and was automatically summarized using artificial intelligence.