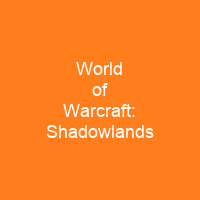 World of Warcraft: Shadowlands is the eighth expansion pack for the massively multiplayer online role-playing game World of Warcraft. Originally scheduled for release on October 27, 2020; its release was delayed until November 23, the sixteenth anniversary of the release of the original game. The expansion opens up the Shadowlands, the realm of the dead in Warcraft lore.

About World of Warcraft: Shadowlands in brief

World of Warcraft: Shadowlands is the eighth expansion pack for the massively multiplayer online role-playing game World of Warcraft. It was announced and made available for preorder at BlizzCon on November 1, 2019. Originally scheduled for release on October 27, 2020; its release was delayed until November 23, the sixteenth anniversary of the release of the original game. The expansion opens up the Shadowlands, the realm of the dead in Warcraft lore. It features the game’s first \”level squish\” and a completely overhauled leveling system. There are four new dungeons for leveling, four more at maximum level, and a new raid. All playable core races received new customization options. The Death Knight class was opened up to pandaren and to all allied races ; players who pre-ordered Shadowlands received access to death knights for these races with Patch 8. 3. 0, Battle for Azeroth’s last major content patch, on January 14, 2020. The four zones that Shadowlands comprise are ruled by Covenants, similar to the Class Orders introduced in Legion. The Maw, a place in the afterlife reserved for the most sinful souls, is now absorbing all souls. In the center is the city of Oribos, which functions as the main player hub similar to Shattrath City in Outland in The Burning Crusade or Dalaran in Wrath of the Lich King and Legion. In addition, a new roguelike called Torghast, Tower of the Damned, was introduced for both solo and group play.

Players experiencing theShadowlands content for the first time are required to reach level 60 before they can choose to pledge themselves to a Covenant, while alts are able to do so at the start of the Shadowland content. After being deposed as Warchief of the Horde and the defeat of N’Zoth, Sylvanas Windrunner travels north to Icecrown Citadel in the Scourge-infested wastes of Northrend, and confronts the reigning Lich King, Bolvar Fordragon. She tears the Helm of Domination from him, shattering the veil between realities and opening a portal to the afterlife of the Warcraft universe. As the effects of the Helm’s destruction are felt acrossAzeroth, she has her forces abduct Alliance leaders Anduin Wrynn, Jaina Proudmoore and Tyrande Whisperwind, and Horde leaders Thrall and Baine Bloodhoof. Champions of the Alliance and Horde alike are tested by defending their land from invaders, as the Scourge has caused the Scourge to run rampant. After learning about the shattered veil, Tyrande slays Blightcaller as the burning for justice and continues her hunt of Sylvanas’s right-hand man, the Banshee Queen of Teldrass. Afterward, they work with agents of the Argent Crusade to gather intel and create footholds to regaining an attack on the IceCrown Citadel. The battle for the Icec Crown Citadel begins.

You want to know more about World of Warcraft: Shadowlands?

This page is based on the article World of Warcraft: Shadowlands published in Wikipedia (as of Dec. 09, 2020) and was automatically summarized using artificial intelligence.

Defense of the Ancients

Defense of the Ancients