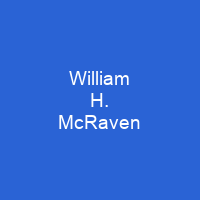 William Harry McRaven is a retired United States Navy four-star admiral. He last served as the ninth commander of the United States Special Operations Command. McRaven has been named as a possible choice to be nominated as U.S. Secretary of Defense by President-elect Joe Biden.

About William H. McRaven in brief

William Harry McRaven is a retired United States Navy four-star admiral. He last served as the ninth commander of the United States Special Operations Command from August 8, 2011, to August 28, 2014. McRaven has been named as a possible choice to be nominated as U.S. Secretary of Defense by President-elect Joe Biden. From 2015 to 2018, he was the chancellor of The University of Texas System. He served numerous staff and command assignments within the special operations community, including platoon commander at Underwater Demolition Team 21SEAL Team Four, squadron commander at Naval Special Warfare Development Group, and task unit commander during the Persian Gulf War. He is the son of Anna Elizabeth and Col. Claude C. McRaven, a Spitfire fighter pilot in World War II who played briefly in the NFL. His father, a career Air Force officer, was stationed at Pope Air Force Base, now known as Pope Field, part of Fort Bragg. His family moved to Texas while he was in elementary school and settled in San Antonio. Mc Raven attended Theodore Roosevelt High School where he took part in track. He graduated in 1977 with a bachelor’s degree in journalism, and was named a Distinguished Alumnus in 2012.

He holds a master’s degree from the Naval Postgraduate School, where he helped establish and was the first graduate from the Special operationsLow intensity conflict curriculum. As a Navy SEAL officer, McRaven was deployed to the Philippines. In 1982 he was assigned to SEAL Team Six under the command of CDR Richard Marcinko but was removed one year later due to McRaven’s concerns about military discipline, and difficulties in keeping his sailors in line. He later served as a staff officer with an interagency coordination focus, including as the director for Strategic Planning in the Office of Combating Terrorism on the National Security Council. In April 2011, Mc Raven was nominated by President Barack Obama for promotion to the rank of vice admiral and confirmed by the Senate Armed Services committee in late June. He was later promoted to the full rank of admiral in late August 2011. In his confirmation hearings McRaven said he favored a steady manpower growth rate of 3% to 5% a year and favored more resources for USSOCOM. He retired from the U. S. Navy in August 2014, after more than 37 years of service.

You want to know more about William H. McRaven?

This page is based on the article William H. McRaven published in Wikipedia (as of Nov. 30, 2020) and was automatically summarized using artificial intelligence.