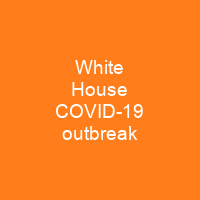 The White House COVID-19 outbreak is an ongoing cluster of SARS-CoV-2 infections that began in September 2020. At least 48 White House staff members or associates have tested positive for the coronavirus. Many of the infections appeared to be related to a ceremony held on September 26 in the Rose Garden for the nomination of Amy Coney Barrett to the Supreme Court.

The White House COVID-19 outbreak is an ongoing cluster of SARS-CoV-2 infections that began in September 2020. At least 48 White House staff members or associates, closely working with White House personnel, have tested positive for the coronavirus. The White House resisted efforts to engage in contact tracing, leaving it unclear how many people were infected in total and what the origins of the spread were. Many of the infections appeared to be related to a ceremony held on September 26 in the Rose Garden for the nomination of Amy Coney Barrett to the Supreme Court, where seating was not socially distanced and participants were mostly unmasked. The outbreak emerged in the final weeks of Trump’s campaign for the 2020 presidential election, a little more than a month before the last day of voting, November 3. Both major outbreaks have had a significant impact on Trump’s presidency. Aides and Trump supporters claim that catching COVID 19 during the October 2020 outbreak cost him the election. A Stanford preprint study concluded that likely over 30,000 cases and 700 deaths could be attributed to the pandemic since the start of the first campaign rally in Tulsa, Oklahoma, on June 22, 2020. In June, the White House scaled back the screening regime, but still required screening for anyone coming into contact with the president or vice president or anyone in close contact with anyone else. In May, an unnamed spokesperson for Vice President Mike Pence tested positive, and the following day, Katie Miller’s positive test result caused several other Pence staffers who were close to the president to be removed from Air Force Force Two.

On November 11, at least 48 people had tested positive. At least one person, White House security office head Crede Bailey, was reported as \”gravely ill,\” having fallen sick in September prior to a Rose Garden event. Other infections included First Lady Melania Trump; GOP Senators Thom Tillis, Mike Lee, and Ron Johnson; GOP Representative Matt Gaetz; former White House counselor Kellyanne Conway; former New Jersey Governor Chris Christie; Notre Dame president John I. Jenkins; Press Secretary Kayleigh McEnany; Chief of Staff Mark Meadows; and Housing and Urban Development Secretary Ben Carson. On November 7, personal valet to President Donald Trump tested positive and was removed from the president’s private plane. The next day, a staffer for the vice president tested positive and was experiencing very mild symptoms, though neither Trump nor Pence had been in close touch with the staffer. Following the November 2020 outbreak, Trump lost access to many of his personnel, including two campaign advisors in charge of challenging vote counting, a political advisor, a dozen White House aides, and 10% of Secret Service agents. The outbreak could have been prevented, according to public health experts such as Anthony Fauci, the director of the National Institute of Allergy and Infectious Diseases and a member of the WhiteHouse Coronavirus Task Force.

You want to know more about White House COVID-19 outbreak?

This page is based on the article White House COVID-19 outbreak published in Wikipedia (as of Dec. 19, 2020) and was automatically summarized using artificial intelligence.