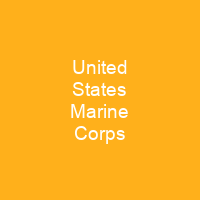 The U.S. Marine Corps is one of the eight uniformed services of the United States. As of 2017, the USMC has around 182,000 active duty members and some 38,500 personnel in reserve. Marines from Ceremonial Companies A & B, quartered in Marine Barracks, Washington, D. C., guard presidential retreats.

The U.S. Marine Corps is one of the eight uniformed services of the United States. The Marine Corps has been part of the U. S. Department of the Navy since 30 June 1834 with its sister service, United States Navy. As of 2017, the USMC has around 182,000 active duty members and some 38,500 personnel in reserve. Marines from Ceremonial Companies A & B, quartered in Marine Barracks, Washington, D. C., guard presidential retreats, including Camp David. Marines of the Executive Flight Detachment of HMX-1 provide helicopter transport to the President and Vice President, with the radio call signs “Marine One’s Own’” and ‘Marine Two’. Marine Security Guards of the Marine Embassy Security Command provide security for American embassies, legations, and consulates at more than 140 posts worldwide. Marine Band, dubbed the “President’s Own” by Thomas Jefferson, provides music for state functions at the White House. The Corps was founded to serve as an infantry unit aboard naval vessels and was responsible for the security of the ship and its crew by conducting offensive and defensive combat during boarding actions and defending the ship’s officers from mutiny. America’s first amphibious landing occurred early in the Revolutionary War on March 1776 as the Marines gained control of Fort Nassau and Fort Montagu, a British naval depot and ammunition depot in New Providence, Bahamas. Throughout the late 19th century, the Marine Corps adapted its role to support naval campaigns, focusing on secondary missions ashore and on land.

In the Pacific theater of World War II the Corps took the lead in a massive campaign of amphibious warfare, advancing from island to island. In 1947, a proposal was made that the Department of Defense furnishes Marine Corps personnel for Foreign Service guard duty under the provisions of the Foreign Service Act of 1946. In 1951, the House of Representatives’ Armed Services Committee called the clause “one of the most important statutory – and traditional – functions of the Marines’”. The Corps has more often than not performed actions of a non-naval nature, including its famous actions in Tripoli, the War of 1812, Chapultepec, and numerous counter-insurgency and occupational duties, World War I, and the Korean War. The Marines have served at the request of various Secretaries of State for over 200 years, including in World War One and the Second World War. During the first year of the MSG program, 36 detachments were deployed worldwide. In 2007, 83 Marines were deployed to overseas missions. In 2008, the Marines were responsible for protecting American embassies around the world, including protecting the US Embassy in Rome, Italy, and protecting the American Embassy in Berlin, Germany. In 2009, the Corps was tasked with protecting U.N. Secretary-General Ban Ki-moon’s residence in Cuba. In 2010, Marines were in charge of protecting the Israeli Embassy in New York City.

You want to know more about United States Marine Corps?

This page is based on the article United States Marine Corps published in Wikipedia (as of Dec. 07, 2020) and was automatically summarized using artificial intelligence.