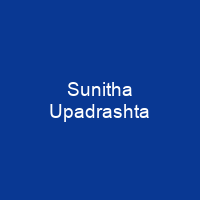 Sunitha Upadrasta is a playback singer, anchor, host, dubbing artist & actress in the Telugu film industry, also known as Tollywood. She got married at the age of 19 to Kiran Kumar Goparaju who works in the media and they later got divorced. The 42-year-old playback singer shared pictures from what appears to be her intimate engagement ceremony.

About Sunitha Upadrashta in brief

Sunitha Upadrasta is a playback singer, anchor, host, dubbing artist & actress in the Telugu film industry, also known as Tollywood. She has received a National Award from All India Radio under light music category, two Film fare Awards for Best Female Playback Singer one each for Telugu and Kannada. In the year 2019, Sunitha was honored with New Jersey state recognition award by the Senate and General assembly of the state of New Jersey passing a resolution to salute her excellence and contributions to the world of music and Indian Cinema. She got married at the age of 19 to Kiran Kumar Goparaju who works in the media and they later got divorced. The 42-year-old playback singer shared pictures from what appears to be her intimate engagement ceremony and shared that she will soon marry Ram, who is reportedly the CEO of a digital media house. Her contributions as a voice-over artist giving voice to over 110 actresses in more than 750 films. She was born on 10 May 1978 in Vijayawada & was raised in Guntur, Andhra Pradesh into a music loving family. At a very early age, she got many opportunities to participate and perform in several concerts, including well known programs featured by All India radio. She sang for the National Film Award for the movie Bhoomi Geetha in 1997, composed by Ilaiyaraaja.

She is also associated as a judge to musical reality shows in various channels. SunithA traveled extensively across 19 foreign countries offering her exclusive live performances across the world as an artist. The couple has two children, a boy and a girl – Aakash Goporaju and Shreya Goperaju. She wrote: “Like every mother, I dream of settling my children well. At the same time, I am blessed with wonderful and thoughtful children and always want to come down well settled… At the moment, the moment has finally come.. Ram has finally entered my life as a caring friend and a wonderful partner” She has begun her singing career as an age of 17 Sasi Preetham, a music director first gave her a chance to sing in her debut film Gulabi. She received her first Nandi award in the year 1999 and bagged the prestigious awards in a row for the years 2002 to 2006 and again for the year 2010 to 2012. She also won the Lata Mangeshkar Best Singer Award for 2011 by the Government of Andhra Uttar Pradesh. Her debut song, \”Tick…. Tick.. Tick..  Tick. is written by Sirivene Vela Lovuva and composed by Sitarnela Sitarama Sitaramasnela. The song is from Telugu TV serial Apartyara, that she also sang from. Apartyaja Geeti Geeta, that was released in 1997.

You want to know more about Sunitha Upadrashta?

This page is based on the article Sunitha Upadrashta published in Wikipedia (as of Dec. 09, 2020) and was automatically summarized using artificial intelligence.