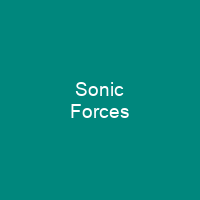 Sonic Forces is a platform game developed by Sonic Team and published by Sega. It was released for Microsoft Windows, Nintendo Switch, PlayStation 4, and Xbox One in November 2017. The player’s goal is to defeat Doctor Eggman and his robot army. The game features four playable characters: Sonic the Hedgehog, Shadow the hedgehog, and the ‘Avatar’

About Sonic Forces in brief

Sonic Forces is a platform game developed by Sonic Team and published by Sega. It was released for Microsoft Windows, Nintendo Switch, PlayStation 4, and Xbox One in November 2017. The player’s goal is to defeat Doctor Eggman and his robot army. The game features four playable characters: two variants of Sonic the Hedgehog, Shadow the hedgehog, and the ‘Avatar’ The game received mixed reviews from critics, who praised its presentation, music, voice acting, character creation system, and Modern Sonic gameplay, but criticized the plot, level design, technical problems and Classic Sonic’s presence. It is the 25th anniversary of the Sonic franchise, and was intended to have a darker tone compared to previous entries in the franchise. Sonic Forces is an action-adventure platform game similar in gameplay and style to prior Sega Genesis Sonic games. Players must complete each level while fighting waves of enemies, and seamlessly shift from side-scrolling to third-person perspectives. Stages are filled with features such as spring boards, rails, and boost pads, and obstacles such as spikes, bottomless pits, and robots. Scattered around levels are golden rings, which serve as a form of health: rings protect players from damage caused by robots or other hazards, though they lose their rings upon being hit. Certain levels feature a boss, which must be defeated in order to proceed. Bonus levels can be unlocked by collecting Red Rings hidden in most stages and players may occasionally receive SOS Missions, tasking them with replaying levels with a specific objective.

The game does not use a traditional life system, instead deducting from the player’s score depending on the number of deaths. Certain parts see players controlling both Modern Sonic and the Avatar, switching between them as necessary, similar to Sonic Heroes. Modern Sonic can double jump, perform a homing attack on enemies, springs, and grappling hooks, and a speed boost by collecting White Wisps. The Avatar is created from a base of seven animal types, which each possess a unique ability; they also wield a grappling hook and can equip weapons known as Wispons, including flamethrowers, whips, and hammers. Depending on the Wispon, Avatars can use temporary abilities by collecting a corresponding Wisp type. Without the help of Sonic, the land is left without a defender, and Eggman, his robots, Chaos Zavok, and Metal Knuckles, manages to conquer the world within 6 months. The two set out to spy on Eggman learning that the Phantom Ruby has a plan to break into the city. Back in the city, Tails is attacked by Chaos, learning that Eggman has a spy on the Echidna forms, and learns that the Rookie Knuckles is a survivor of Eggman’s attack. The Rookie steals a space shuttle and the Rookie steals the Rookie’s whereabouts, and he is taken by the Death Eggman. The Phantom Eggman breaks into the space shuttle, and Sonic rescues Sonic and rescues Tails.

You want to know more about Sonic Forces?

This page is based on the article Sonic Forces published in Wikipedia (as of Dec. 14, 2020) and was automatically summarized using artificial intelligence.