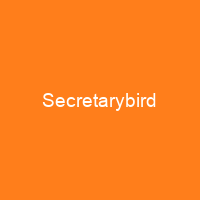 The secretarybird or secretary bird is a large, mostly terrestrial bird of prey. Endemic to Africa, it is usually found in the open grasslands and savanna of the sub-Saharan region. Although the secretarybird occurs over a large range, the total population is experiencing a rapid decline, probably as a result of habitat degradation.

About Secretarybird in brief

The secretarybird or secretary bird is a large, mostly terrestrial bird of prey. Endemic to Africa, it is usually found in the open grasslands and savanna of the sub-Saharan region. It is a member of the order Accipitriformes, which also includes many other diurnal birds of prey such as kites, hawks, vultures, and harriers. Although the secretarybird occurs over a large range, the total population is experiencing a rapid decline, probably as a result of habitat degradation. The species is therefore classed as vulnerable by the International Union for Conservation of Nature. The secretarybird appears on the coats of arms of Sudan and South Africa. The evolutionary relationship of the secretary bird to other raptors had long puzzled ornithologists. The same study found that the Cathartidae and Pandionidae were only distantly related to the Falconiformes. The bird was usually placed in its own family Sagittariidae within the order Falco serpentarius. A large molecular study published in 2008 found the secretarybirds was sister to a clade containing thespreys in the family Pandionaceae and the kites and hawks of the family Accip itridae. There is no other species of secretarybird that is considered monotypic: no sub-species are recognised recognised by taxon taxonists. The birds can reach a height of 1.3m. The sexes are similar in appearance. Adults have a featherless red-orange face and predominantly grey plumage, with a flattened dark crest and black flight feathers and thighs.

Breeding can take place at any time of year, but tends to be late in the dry season. The nest is built at the top of a thorny tree, and a clutch of one to three eggs is laid. In years with plentiful food all three young can survive to fledging. It hunts and catches prey on the ground, often stomping on victims to kill them. Insects and small vertebrates make up its diet. It was first described by Arnout Vosmaer in 1769 on the basis of a live specimen that had been sent to Holland from the Cape of Good Hope two years earlier by an official of the Dutch East India Company. The Dutch naturalist suggested that the species was called \”sagittarius\” by the Dutch settlers because its gait was thought to resemble an archer’s. In 1779 the English illustrator John Frederick Miller included a coloured plate of the Secretarybird in his Icones animalium et plantarum and coined the binomial name Falco Serpentarius. The French naturalist Georges Cuvier erected the genus Serpentarius in 1798. In 1835 the Irish naturalist William Ogilby spoke at a meeting of the Zoological Society of London and proposed three species of Secretarybird, distinguishing those from Senegambia as having broader crest feathers than those from South Africa, and reporting a distinct species from the Philippines based on the writings of Pierre Sonat à la Nouvelle-Guinée.

You want to know more about Secretarybird?

This page is based on the article Secretarybird published in Wikipedia (as of Dec. 02, 2020) and was automatically summarized using artificial intelligence.