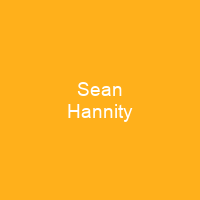 Sean Patrick Hannity is an American talk show host and conservative political commentator. He is the host of The Sean Hannity Show, a nationally syndicated talk radio show. He also hosts a commentary program, Hannity, on Fox News. Hannity was an early supporter of Donald Trump in the 2016 presidential election.

About Sean Hannity in brief

Sean Patrick Hannity is an American talk show host and conservative political commentator. Hannity is the host of The Sean Hannity Show, a nationally syndicated talk radio show. He also hosts a commentary program, Hannity, on Fox News. Hannity was an early supporter of Donald Trump in the 2016 presidential election. Since Trump’s election, Hannity has often acted as an unofficial spokesman for the President, criticizing the media and attacking the special counsel inquiry. Hannity has sometimes promoted conspiracy theories, such as birtherism, claims that the murder of Seth Rich was part of a conspiracy, and falsehoods about Hillary Clinton’s health. He has written three New York Times best-selling books: Let Freedom Ring: Winning the War of Liberty over Liberalism; Deliver Us from Evil; and Conservative Victory: Defeating Obama’s Radical Agenda, and released a fourth, Live Free or Die, in 2020. In his youth, Hannity worked as a paperboy delivering issues of the New York Daily News and the Long Island Daily Press. His parents were initially supporters of President John F. Kennedy, eventually growing more Republican in their views as time went on, though they resisted being overtly political at home. Hannity attended Sacred Heart Seminary in Hempstead, New York and St. Pius X Preparatory Seminary. He attended New York University and Adelphi University, but did not graduate either. In 1982, Hannity started a house-painting business and a few years later, working as a building contractor in Santa Barbara, California.

In 1996, Hannity and Alan Colmes co-hosted Hannity & Colmes on Fox. After Colmes announced his departure in January 2008, Hannity merged the Hannity and Colmes show into Hannity. By 2018, Hannity had become one of the most-watched hosts in cable news and most-listened-to hosts in talk radio, due in part to his closeness and access to Trump. He is the son of Lillian and Hugh Hannity, a World War II veteran and family-court officer. His grandparents immigrated to the United States from Ireland. He grew up in Franklin Square,. New York on Long Island, He was the youngest of four siblings and the only boy. After leaving KCSB, Hannity placed an ad in radio publications, presenting himself as the most talked-about college radio host in America. He later joined WVNN in Athens, Alabama and shortly afterward, WGST in Atlanta. In September 1996, Fox News co-founder Roger Ailes hired the then relatively unknown Hannity to host a television program under the working title LTBD. In January 1997, Hannity was hired to co- host and show on WABC giving him a full-time slot. Later that year, Hannity left WABC and debuted as Hannity &Colmes. He left WG ST for WSB in Atlanta in 1992, filling the slot vacated by Neal Boortz, who had moved to competing station WSB. In January 2013, Hannity joined WABC in New York, where he hosts the afternoon drive show during Christmas week.

You want to know more about Sean Hannity?

This page is based on the article Sean Hannity published in Wikipedia (as of Nov. 27, 2020) and was automatically summarized using artificial intelligence.