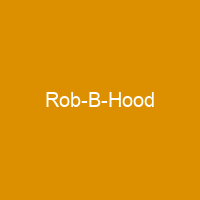 Rob-B-Hood is a 2006 Hong Kong action comedy film written, produced and directed by Benny Chan, and starring Jackie Chan, Louis Koo, Yuen Biao and Michael Hui. The movie is about a trio of burglars who kidnap a baby from a wealthy family on behalf of triads. The trio are forced to protect the baby from the triads who hired them in the first place.

Rob-B-Hood is a 2006 Hong Kong action comedy film written, produced and directed by Benny Chan, and starring Jackie Chan, Louis Koo, Yuen Biao and Michael Hui. The film was produced with a budget of USD 16. 8 million and filmed between December 2005 and January 2006. It is the first film in over 30 years in which Jackie Chan plays an anti-hero. It topped the Chinese box office in October 2006 and despite not being given a release in most European and North American countries, it grossed over US$20 million worldwide. The movie is about a trio of burglars who kidnap a baby from a wealthy family on behalf of triads. The trio are forced to protect the baby from the triads who hired them in the first place. It was released in Hong Kong, China and Southeast Asia on 29 September 2006 based on Hong Kong to generally positive reviews. It has also been released in China, Taiwan, Japan and South Korea, but not in the U.S. and Europe. The plot involves the kidnapping of a newborn baby by a group of men who are hired by a triad boss to deliver the baby to him for HK$7 million. The three men, Thongs, Octopus and the Landlord, take care of the baby for a short time, developing strong bonds with him. Thongs and Octopus are almost forced to surrender the baby when they are threatened to death by the Triad boss, who insists the baby is only proven to be his grandson by the blood sample from the baby’s arm.

They eventually hand over the baby and the money to the triad, who meet them with the rest of the money at the boss’ mansion where the baby reluctantly leaves them for the Triads’ amusement park. The Triads are enraged by the non-delivery of his “grandson” and send his men to retrieve the baby, but Thongs almost manages to escape with the baby but is almost killed in the process. The triads and the police are after the baby; the trio are eventually forced to hand the baby over to the police and hand the money back to the trio. The two burglars then go into hiding with the child, but are later found by the police, who arrest them and take them back to their flat. The Landlord is later arrested for reckless driving and is released from jail. He receives a phone call from his middleman Uncle Seven, offering him a job to kidnap baby Lee. He is offered HK$30 million for the baby. The duo accept the job without knowing its objectives, finding out only after the Landlords has fled the Lees’ mansion with theBaby. Over the next few days, the two begin to regret their vices: Thongs resists the urge to gamble, while Octopus feels sorry for cheating on his wife. Meanwhile, both theTriad boss and the Police Inspector Mok are after them, and both the triAD boss and police are also after them.

You want to know more about Rob-B-Hood?

This page is based on the article Rob-B-Hood published in Wikipedia (as of Nov. 05, 2020) and was automatically summarized using artificial intelligence.