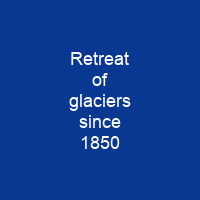 Mid-latitude mountain ranges such as the Himalayas, Rockies, Alps, Cascades, and the southern Andes are showing some of the largest proportionate glacial losses. The retreat of mountain glaciers, notably in western North America, Asia, the Alps and tropical and subtropical regions of South America, Africa and Indonesia, provide evidence for the rise in global temperatures.

About Retreat of glaciers since 1850 in brief

Mid-latitude mountain ranges such as the Himalayas, Rockies, Alps, Cascades, and the southern Andes are showing some of the largest proportionate glacial losses. The retreat of mountain glaciers, notably in western North America, Asia, the Alps and tropical and subtropical regions of South America, Africa and Indonesia, provide evidence for the rise in global temperatures since the late 19th century. The acceleration of the rate of retreat since 1995 of key outlet glaciers of the Greenland and West Antarctic ice sheets may foreshadow a rise in sea level, which would affect coastal regions. The mass balance, or difference between accumulation and ablation, of a glacier is crucial to its survival. Climate change may cause variations in both temperature and snowfall, resulting in changes in mass balance. A glacier with a sustained negative balance loses equilibrium and retreats. A sustained positive balance is also out of equilibrium and will advance to reestablish equilibrium. Currently, nearly all glaciers have a negative mass balance and are retreating. The key symptom of disequilibrium is thinning along the entire length of the glacier. The result is marginal recession of the accumulation zone margin, not just of the terminus. In effect, the glacier no longer has a consistent accumulation zone and without an accumulation zone cannot survive. For example, Easton Glacier in Washington state, U.S. will likely shrink to half its size but at a slowing rate of reduction and stabilize at that size despite the warmer temperature over a few decades.

However, the Grinnell Glacier in Montana will shrink at an increasing rate until it disappears. The difference is that the upper section of Easton glacier remains healthy and snow-covered, while even the upper part of Grinnel Glacier is bare, is melting and has thinned. Small altitude range glaciers are located between the Tropic of Cancer and the Arctic Circle. Both areas support glacier ice from mountain valley glaciers, which are usually located in higher mountainous regions. Glaciers in these latitudes are more widespread and tend to be greater in mass than those in the polar regions. They are most widely studied over the past 150 years with most of the most widespread glacier regions being in the mountain ranges of New Zealand, South America and the Patagonian Coast Ranges of North America; the Rocky Mountains; the Pyrenees; and the South Andes in South America. If the mass balance of a significant portion of the glaciers is negative, it is in disequ equilibrium with the climate and will melt away without a colder climate andor an increase in frozen precipitation. The demise of glaciers in these regions has the potential to affect water supplies in those areas. The glaciers with minimal mass balance are most likely to fall into disequilibria with theclimate and are located either between the Cancer and Arctic Circle, or between the Capricorn and the Antarctic Circle, and even between the Antarctic and the Cape Verdean Circle. If they do not find an equilibrium, they will eventually disappear.

You want to know more about Retreat of glaciers since 1850?

This page is based on the article Retreat of glaciers since 1850 published in Wikipedia (as of Dec. 05, 2020) and was automatically summarized using artificial intelligence.

Tags: Retreat of glaciers since 1850