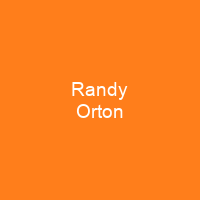 Randal Keith Orton is an American professional wrestler and actor. He is currently signed to WWE, where he performs on the Raw brand. He has held the WWE Championship 10 times and WWE’s World Heavyweight Championship four times. He holds the third-most world championship victories in history at 14, behind John Cena and Ric Flair and tied with Triple H.

About Randy Orton in brief

Randal Keith Orton is an American professional wrestler and actor. He is currently signed to WWE, where he performs on the Raw brand. Orton has held the WWE Championship 10 times and WWE’s World Heavyweight Championship four times. He won his first United States Championship in 2018, becoming the 18th overall Grand Slam Champion after already having been the 17th Triple Crown Champion. He received a bad conduct discharge from the Marines in 1999 after going AWOL on two occasions and disobeying an order from a commanding officer. He was tried and convicted under a special court-martial, subsequently spending 38 days in the brig at Camp Pendleton. His father Bob Orton Jr. and uncle Barry Orton were all professional wrestlers. He trained in and wrestled for the Mid-Missouri Wrestling Association and Southern Illinois Conference Wrestling before being signed by the WWF. He has a younger brother named Nathan, who is a stand-up comedian, and a younger sister named Rebecca. His parents tried to convince him to stay away from the business, and his father warned him that life in the ring meant a life on the road and away from family. He made his wrestling debut in 2000 at the MMWA-SIC Wrestling in St. Louis, Missouri, an off-shoot of the historic St. Louis Wrestling Club headed by Sam Muchnick. In 2001, Orton signed a deal with the then World Wrestling Federation and was sent to its developmental territory, Louisville, Kentucky.

During his time in Ohio Valley Wrestling, he wrestled the likes of Rico Constantino and The Prototype. He also wrestled a few matches with Phil e. Blunt and refereed a few World Organized Wrestling matches with Mark Bland. In 2006, he joined forces with Edge in a tag team known as Rated-RKO. In mid-2007, he gained two WWE Championship reigns in one night,becoming the second youngest two-time WWE Champion at the age of 27. In 2008, he formed the group The Legacy with Cody Rhodes and Ted DiBiase Jr. in 2008. They disbanded in 2010, and Orton returned to singles competition. From 2013 to 2015, he was aligned with The Authority, who named him the \”face of the WWE\”. He joined The Wyatt Family in 2016, winning the SmackDown Tag Team Championship with Bray Wyatt and Luke Harper before turning on them in 2017. In 2016, he won the World Championship at TLC: Tables, Ladders & Chairs. In 2017, he unified with the WWE Championships to become the WWE World Heavyweights Champion at Tlc: TLC. He holds the third-most world championship victories in history at 14, behind John Cena and Ric Flair and tied with Triple H. He is the winner of the 2013 Money in the Bank ladder match, as well as the 2009 and 2017 Royal Rumble matches, and has headlined multiple WWE pay-per-view events, including WrestleMania XXV and WrestleMania XXX.

You want to know more about Randy Orton?

This page is based on the article Randy Orton published in Wikipedia (as of Dec. 04, 2020) and was automatically summarized using artificial intelligence.