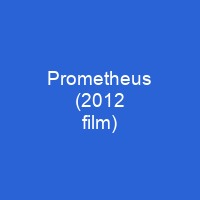 Prometheus is a 2012 science fiction horror film directed by Ridley Scott. It stars Noomi Rapace, Michael Fassbender, Guy Pearce, Idris Elba, Logan Marshall-Green, and Charlize Theron. Development of the film began in the early 2000s as a fifth installment in the Alien franchise. The movie was shot using 3D cameras throughout, almost entirely on practical sets, and on location in England, Iceland, Spain, and Scotland.

About Prometheus (2012 film) in brief

Prometheus is a 2012 science fiction horror film directed by Ridley Scott. It stars Noomi Rapace, Michael Fassbender, Guy Pearce, Idris Elba, Logan Marshall-Green, and Charlize Theron. It is set in the late 21st century and centers on the crew of the spaceship Prometheus. The crew arrives on a distant world and discovers a threat that could cause the extinction of the human species. Development of the film began in the early 2000s as a fifth installment in the Alien franchise. A sequel, Alien: Covenant, was released in May 2017. The film was praised for the designs, production values and cast performances, but received criticism for formulaic and unresolved plot points. It was released on June 1, 2012, in the United Kingdom and on June 8, 2012,. The film grossed over USD 403 million worldwide. The movie was shot using 3D cameras throughout, almost entirely on practical sets, and on location in England, Iceland, Spain, and Scotland. It has been described as a prequel to Scott’s 1979 science-fiction horror film Alien. According to Scott, although the film shares \”strands of Alien’s DNA, so to speak\”, and takes place in the same universe, Prometheus explores its own mythology and ideas. It also features a large 3D holographic star map highlighting Earth, highlighting the star of the movie’s title, and a large holographic hologram of a man in a red jumpsuit with a black mask. The director said that the film is not directly connected to the story of Alien, but to the events of the Alien films.

The plot centers on an expedition to find the Engineers, humanity’s forerunners, on the moon LV-223. In 2089, archaeologists Elizabeth Shaw and Charlie Holloway discover a star map in Scotland that matches others from several unconnected ancient cultures. Peter Weyland, the elderly CEO of Weylands Corporation, funds an expedition, aboard the scientific vessel Prometheus, to follow the map. The ship’s crew travels in stasis while the android David monitors their voyage. The expedition is cut short when a storm forces the crew to return to the ship. Shortly after, a snake-like creature sprays a corrosive fluid that kills Millburn and kills Holloway. When the crew returns, they find a surviving Engineer in a control room containing a surviving engineer, David. David secretly takes a cylinder from the structure, while the remaining cylinders begin leaking a dark liquid. In the ship’s lab, the Engineer’s DNA is found to match that of humans. He intentionally taints a drink with the liquid and gives it to the unsuspecting David, who had stated he would do it for answers. He is rushed back to Prometheus, but refuses to let him back at his death, urging him to burn with a flamethrower at his face-first. When he dies, Fifield falls-first into a puddle of dark liquid that melts his helmet.

You want to know more about Prometheus (2012 film)?

This page is based on the article Prometheus (2012 film) published in Wikipedia (as of Jan. 04, 2021) and was automatically summarized using artificial intelligence.