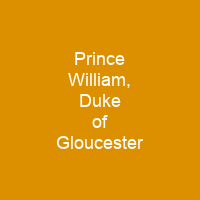 Prince William, Duke of Gloucester was the son of Princess Anne and Prince George of Denmark. He was viewed by contemporaries as a Protestant champion. His birth seemed to cement the Protestant succession established in the ‘Glorious Revolution’ His death in 1700 at the age of 11 precipitated a succession crisis.

About Prince William, Duke of Gloucester in brief

Prince William, Duke of Gloucester was the son of Princess Anne and Prince George of Denmark. He was viewed by contemporaries as a Protestant champion because his birth seemed to cement the Protestant succession established in the ‘Glorious Revolution’ His death in 1700 at the age of 11 precipitated a succession crisis as his mother was the only individual remaining in the Protestant line of succession established by the Bill of Rights 1689. The English Parliament did not want the throne to revert to a Catholic, and so passed the Act of Settlement 1701, which settled the throne of England on Electress Sophia of Hanover, a cousin of King James II, and her Protestant heirs. He grew close to his uncle William, who created him a Knight of the Garter, and his aunt Mary, who frequently sent him presents. At his nursery in Campden House, Kensington, he befriended his Welsh body-servant, Jenkin Lewis, whose memoir of the Duke is an important source for historians. His convulsions were possibly symptomatic of meningitis, likely contracted at birth and which resulted in hydrocephalus. Though described as a ‘brave livlylike boy’, Gloucester became ill with convulsion when he was three weeks old, so his mother moved him into Craven House. The ode The Noise of Foreign Wars, attributed to Henry Purcell, was written in celebration of the birth. Other congratulatory odes, such as Purcell’s last royal ode Who Can From Joy Refrain? were composed for his birthdays in later years.

As part of his treatment, he was driven outside every day in a small carriage, pulled by Shetland ponies, to maximise his exposure to the air of the gravel pits. When the effectiveness of this treatment exceeded their expectations, Anne and her husband acquired a permanent residence in the Jacobean mansion in 1690. It was here that his physician, John Radcliffe, treated him with regular doses of bark and bark extract. Throughout his life, Gloucester suffered from a recurrent recurrent illness from a disease called ‘ague’, which was treated by his physician and Jesuit physician. The King, who was one of the godparents along with the Marchioness of Halifax and the Lord Chamberlain, Lord Dorset, declared him Duke of Gloucester, although the peerage was never formally created. As they had no children, Mary’s younger sister, Anne, was designated their heir presumptive in England and Scotland. William and his wife, James’s elder daughter Mary, were recognised by the English and Scottish parliaments as king and queen. The accession of William and Mary and the succession through Anne were enshrined in the Bill Of Rights 16 1889. The birth of a son at 5 a.m. on 24 July 1689 in Hampton Court Palace was attended by several witnesses, the King and Queen and most of the persons of quality about the court. Three days later, the newborn baby was baptised William Henry after his uncle King William by Henry Compton, Bishop of London.

You want to know more about Prince William, Duke of Gloucester?

This page is based on the article Prince William, Duke of Gloucester published in Wikipedia (as of Dec. 07, 2020) and was automatically summarized using artificial intelligence.