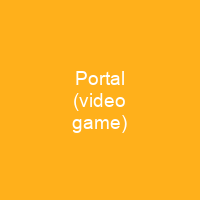 Portal is a 2007 puzzle-platform game developed and published by Valve. It was released in a bundle, The Orange Box, for Windows, Xbox 360 and PlayStation 3. The player controls the protagonist, Chell, from a first-person perspective as she is challenged to navigate through a series of rooms. The game’s unique physics allows kinetic energy to be retained through portals.

About Portal (video game) in brief

Portal is a 2007 puzzle-platform game developed and published by Valve. It was released in a bundle, The Orange Box, for Windows, Xbox 360 and PlayStation 3. The player controls the protagonist, Chell, from a first-person perspective as she is challenged to navigate through a series of rooms using the Aperture Science Handheld Portal Device. The game’s unique physics allows kinetic energy to be retained through portals, requiring creative use of portals to maneuver through the test chambers. Portal was acclaimed as one of the most original games of 2007, despite criticisms of its short duration and limited story. Over four million copies of the game have been sold since its release, spawning official merchandise from Valve including plush Companion Cubes, as well as fan recreations of the cake and portal gun. A standalone version, titled Portal: Still Alive, was released on the Xbox Live Arcade service in October 2008, which added 14 puzzles to the gameplay, and a sequel, Portal 2, released in 2011, expanding on the storyline, adding several new gameplay mechanics and a cooperative multiplayer mode. The portals create a visual and physical connection between two different locations in three-dimensional space. Neither end is specifically an entrance or exit; all objects that travel through one portal will exit through the other. Chell and all other objects in the game that can fit into the portal ends will pass through the portal. However, a portal shot cannot pass through an open portal; it will simply deactivate or create a new portal in an offset position.

Although Chell is equipped with mechanized heel springs to prevent her from falling, she can also be killed by various hazards in the test chamber, such as turret guns, bouncing balls of energy and toxic liquid. She is sometimes provided with large buttons that she can pick up and use to open doors or activate mechanisms, known as Particle Grills. These fields also block attempts to fire portals through them. When passed through, they will deactivate any active portals and disintegrate any object carried through them; when passed through they will also disintegrate. The portal gun can create two distinct portal ends, orange and blue. Creating a portal end instantly deactivates an existing portal end of the same color. If portal ends are not on parallel planes, the character passing through is reoriented to be upright with respect to gravity after leaving a portal ends. For example, a common maneuver is to place a portal some distance below the player on the floor, jump down though it, gaining speed in freefall, and emerge through theOther portal on a wall, flying over a gap or another obstacle. As GLaDOS puts it, \”In layman’s terms: speedy thing goes in, speedy thing comes out. \” If portal end is not on a parallel plane, the player passing through  the other portal is not able to anchor, and will not be able to open wall surfaces, special glass, liquids, or areas that are too small.

You want to know more about Portal (video game)?

This page is based on the article Portal (video game) published in Wikipedia (as of Dec. 07, 2020) and was automatically summarized using artificial intelligence.