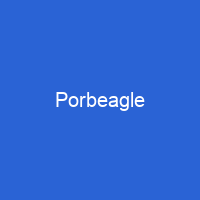 The porbeagle is a species of mackerel shark in the family Lamnidae. It is found in the cold and temperate marine waters of the North Atlantic and Southern Hemisphere. In the North Pacific, its ecological equivalent is the closely related salmon shark. The International Union for Conservation of Nature has assessed the porbeagles as vulnerable worldwide.

About Porbeagle in brief

The porbeagle is a species of mackerel shark in the family Lamnidae. It is found in the cold and temperate marine waters of the North Atlantic and Southern Hemisphere. In the North Pacific, its ecological equivalent is the closely related salmon shark. It typically reaches 2. 5 m in length and a weight of 135 kg. It has large pectoral and first dorsal fins, tiny pelvic, second dorsal, and anal fins, and a crescent-shaped caudal fin. The most distinctive features of this species are its three-cusped teeth, the white blotch at the aft base of its first dorsal fin, and the two pairs of lateral keels on its tail. This shark is aplacental viviparous with oophagy, developing embryos being retained within the mother’s uterus and subsisting on non-viable eggs. Females typically bear four pups every year. The International Union for Conservation of Nature has assessed the porbeagles as vulnerable worldwide, and as either endangered or critically endangered in different parts of its northern range. Direct commercial fishing, principally by Norwegian longliners, led to stock collapses in the eastern North Atlantic in the 1950s, and in the western North Atlantic in the 1960s. It continues to be caught throughout its range, both intentionally and as bycatch, with varying degrees of monitoring and management. The shark is fast and highly active, with physiological adaptations that enable it to maintain a higher body temperature than the surrounding water.

It can be solitary or gregarious, and has been known to perform seemingly playful behavior. The first scientific description of the por beagle was authored by French naturalist Pierre Joseph Bonnaterre in the 1788 Table de nature in the encyclopéique in the  Encyclopéque de nature, and based on an earlier account by Thomas Pennant. In 1816, naturalist Georges Cuvier placed it into its own subgenus, Lamna, which was later later elevated to the rank of full genus. The etymology of the word ‘porbeagle’ is obscure. A common suggestion is that it combines \”porpoise\” and ‘beagle’, referencing this shark’s shape and tenacious hunting habits. Another is that the word was either borrowed from Cornish or formed from a Cornish first element with the English \”beagle\”. The Dictionary also notes that no evidence exists for a connection to the French porc, meaning’swine’, or to porpoise, as has been proposed. Other common names for the por Beagle include Atlantic mackeREL shark, Beaumaris shark, bottle-nosed shark, blue dog, and bottle-Nosed shark. It is well regarded as a game fish by recreational anglers. It occurs in the place of the salmon shark, which occurs in which it is later placed in the genus Cuvier, which later later placed it in the subgenus Lamna.

You want to know more about Porbeagle?

This page is based on the article Porbeagle published in Wikipedia (as of Dec. 02, 2020) and was automatically summarized using artificial intelligence.