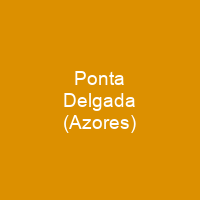 Ponta Delgada is the largest municipality and economic capital of the Autonomous Region of the Azores in Portugal. It is located on São Miguel Island, the largest and most populous in the archipelago. In the early 21st century, it became the third largest town in Portugal, in economic riches and the number of residents.

About Ponta Delgada (Azores) in brief

Ponta Delgada is the largest municipality and economic capital of the Autonomous Region of the Azores in Portugal. It is located on São Miguel Island, the largest and most populous in the archipelago. The population in 2011 was 68,809, in an area of 232. 99 square kilometres. There are 17,629 residents in the three central civil parishes that comprise the historical city: São Pedro, São Sebastião, and São José. It became the region’s administrative capital under the revised constitution of 1976; the judiciary and Catholic see remained in the historical capital of Angra do Heroísmo while the Legislative Assembly was established in Horta. It was at the forefront of political change after the Carnation Revolution, when property-leaning farmers challenged the Civil Governor António Borges Coutinho, who was responsible, under the direction of the MFA, for land reforms. The MFA forced his resignation, and inspired a series of terrorist acts that plunged the Azore Islands into political turmoil following the detentions and arrests of a number of political leaders. The origin of the placename, ‘Thin Cape’, was elaborated by the famous Portuguese chronicler, Father Gaspar Frutuoso, who wrote: This city of Ponta DelGada is named for its situation located along volcanic lands, thin and not too considerable like on other islands, that lead to the sea, and where later, was constructed the chapel of Santa Clara, which was named the Santa Clara point … In around 1450, Pêro de Teive, established a small fishing village that eventually grew into the urban agglomeration in Santa Clara.

In 1522 an earthquake and landslide devastated the provincial capital, destroying many of the buildings and killing several people. Quickly, its role changed, and eventually, it was elevated to status of city, during the reign of King D. João III by decree, dated 2 April 1546. The naval Battle ofPonta delgada took place on 26 July 1582, off the coast, as part of the 1580 Portuguese succession crisis. During the 19th century the municipality experienced its greatest boost of economic activity, with the funneling of citrus exports to United Kingdom and the growth of foreign-owned businesses in the historic center, many of them Jewish merchants after 1818. At the beginning of the 20th century, PontaDelgada’s position steadily chipped-away at its position in the hierarchy of the economy and in the Azorean hierarchy of power. The poet Bulhão Pato was surprised by the extraordinary riches of the plantation owners, the gentlemen farmers that lived within the urbanized core: exporters of oranges and corn, bankers, investors, industrialists and shippers, all to a privileged class of social thinkers and philanthropists. In the early 21st century, it became the third largest town in Portugal, in economic riches and the number of residents.

You want to know more about Ponta Delgada (Azores)?

This page is based on the article Ponta Delgada (Azores) published in Wikipedia (as of Dec. 29, 2020) and was automatically summarized using artificial intelligence.