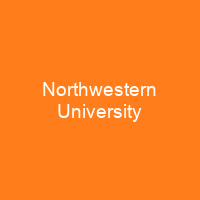 Northwestern University is a private research university in Evanston, Illinois. It was founded in 1851 by nine men who sought to establish a university that would serve the former Northwest Territory. As of fall 2019, the university had 21,946 enrolled students, including 8,327 undergraduates and 13,619 graduate students.

About Northwestern University in brief

Northwestern University is a private research university in Evanston, Illinois. It was founded in 1851 by nine men who sought to establish a university that would serve the former Northwest Territory. The university is a founding member of the Big Ten Conference and the conference’s only private university. As of fall 2019, the university had 21,946 enrolled students, including 8,327 undergraduates and 13,619 graduate students. Valued at USD 11. 1 billion, Northwestern currently possesses the eleventh largest university endowment in the U.S. Its numerous research programs bring in nearly USD 900 million in sponsored research each year. Northwestern’s faculty and alumni have included 1 Fields Medalist, 20 Nobel Prize laureates, 40 Pulitzer Prize winners, 6 MacArthur Fellows, 17 Rhodes Scholars, 27 Marshall Scholars, 23 National Medal of Science winners, 11 National Humanities Medal recipients, 84 members of the American Academy of Arts and Sciences, 10 living billionaires, 16 Olympic medalists, and 2 U. S. Supreme Court Justices. The school’s law, medical, and professional schools, along with its nationally ranked Northwestern Memorial Hospital, are located on a 25-acre campus in Chicago’s Streeterville neighborhood. It also maintains a campus in Doha, Qatar and locations in San Francisco, California, Washington, D. C. and Miami, Florida. In the 1870s and 1880s, Northwestern affiliated itself with the existing professional schools of law, medicine, and dentistry in Chicago. In 1869, Northwestern admitted its first female students in 1869 and the first woman was graduated in 1874.

The first building, Old College, opened on November 5, 1855. To raise funds for its construction, Northwestern sold USD 100 \”perpetual scholarships\” entitling the purchaser and his heirs to free tuition. The Kellogg School of Management, the Pritzker School of Law, the Feinberg School of Medicine, the Bienen School of Music, the Medill School of Journalism, the School of Communication, and The Graduate School are among the buildings that survived the Chicago Fire of the Great Great Fire of 1871. Willard Frances Willard, who later gained fame as a suffragette and as one of the founders of the Woman’s Christian Temperance Union, became the school’s first dean of women. The Northwestern Law School is the oldest law school in Chicago and is the second oldest in the United States. The University of Illinois at Chicago offers over 200 formal academic concentrations, including various dual degree programs. It is one of only a handful of universities in the world to offer both undergraduate and graduate degrees in the same major. Northwestern is known for its focus on interdisciplinary education, extensive research output, and student traditions. The university’s main 240-acre campus lies along the shores of Lake Michigan in Evanston, 12 miles north of Downtown Chicago. It is located in the heart of Chicago’s St. Charles neighborhood, and the university’s law and medical schools were already integrated with each other in the 1860s and 1870s.

You want to know more about Northwestern University?

This page is based on the article Northwestern University published in Wikipedia (as of Dec. 23, 2020) and was automatically summarized using artificial intelligence.