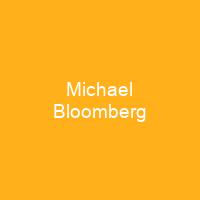 Michael Rubens Bloomberg is an American businessman, politician, philanthropist, and author. He is the majority owner and co-founder of Bloomberg L. P.. He was the mayor of New York City from 2002 to 2013. In 2020, Forbes ranked him as the sixteenth-richest person in the world, with an estimated net worth of USD 48 billion.

About Michael Bloomberg in brief

Michael Rubens Bloomberg is an American businessman, politician, philanthropist, and author. He is the majority owner and co-founder of Bloomberg L. P.. He was the mayor of New York City from 2002 to 2013. He was a candidate for the 2020 Democratic nomination for president of the United States. In 2020, Forbes ranked him as the sixteenth-richest person in the world, with an estimated net worth of USD 48 billion as of April 7, 2020. As of July 21, 2020, Bloomberg ranked 8th in Forbes 400 with net worth USD 60. 1 billion. Since signing The Giving Pledge, Bloomberg has given away USD 8. 2 billion and is a member of Kappa Beta Phi and Tau Beta Pi. He wrote an autobiography, Bloomberg by Bloomberg, with help from Bloomberg News editor-in-ehief Matthew Winkler. The Bloomberg Center at the Harvard Business School was named in William Henry’s honor. Bloomberg’s family is Jewish, and he is a members of the Temple Emanu-El in Manhattan. His maternal grandfather, Max Rubens, was a Lithuanian Jewish immigrant from present-day Belarus, and his maternal grandmother was born in New York to LithuanianJewish parents. The family lived in Allston until Bloomberg was two years old, followed by Brookline, Massachusetts, for two years, finally settling in the Boston suburb of Medford, Massachusetts. He graduated from Medford High School in 1960. He went on to attend Johns Hopkins University, where he constructed the blue jay costume for the university’s mascot. In 1966, he graduated from Harvard Business.

School with a Master of Business Administration degree. In 1973, Bloomberg became a general partner at Salomon Brothers, a large Wall Street investment bank. In 1981, he founded his own company named Market Innovative News. In 1986, the company renamed itself Bloomberg L P. The company sold customized computer terminals that delivered real-time market data, financial calculations, and other analytics to Wall Street firms. In 2002, Bloomberg was elected the 108th mayor of NYC. First elected in 2001, he held office for three consecutive terms, winning re-election in 2005 and in 2009. In November 2019, Bloomberg officially launched his campaign for the Democratic nomination. He ended his campaign in March 2020, after having won only 61 delegates. He has also faced significant criticism for his expansion of the city’s stop and frisk program, support for which he reversed with an apology before his 2020 presidential run. He also led a rezoning of large areas of theCity, which facilitated massive and widespread new commercial and residential construction after the September 11 attacks. He founded the Bloomberg Terminal, which was released to market in December 1982, and later became the first market-only Bloomberg News terminal. In 2003, Bloomberg co-founded the Bloomberg News Group, which is a financial information, software and media firm that is known for its Bloomberg Terminal. In 2007, Bloomberg founded the New York-based Bloomberg Media.

You want to know more about Michael Bloomberg?

This page is based on the article Michael Bloomberg published in Wikipedia (as of Dec. 06, 2020) and was automatically summarized using artificial intelligence.

List of presidents of the United States by net worth