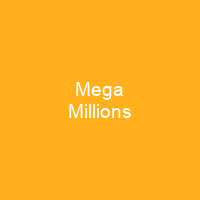 Mega Millions is an American multi-jurisdictional lottery game. It is offered in 45 states, the District of Columbia, and the U.S. Virgin Islands. The largest jackpot in Mega Millions history was USD 1.537 billion, for the October 23, 2018 drawing, in which there was one winning jackpot ticket.

About Mega Millions in brief

Mega Millions is an American multi-jurisdictional lottery game. It is offered in 45 states, the District of Columbia, and the U.S. Virgin Islands. The largest jackpot in Mega Millions history was USD 1.537 billion, for the October 23, 2018 drawing, in which there was one winning jackpot ticket, sold in South Carolina. As of January 2020, there were 47 lotteries offering Mega Millions and Powerball. The expansion occurred on January 31, 2010, as 23 Powerball members began selling Mega Millions tickets for their first drawing. The current Mega Millions format began in October 2017. Plays are USD 2 per game. For an additional USD 1 per play, the Megaplier, if activated, multiplies non-jackpot prizes. Several of the game’s members offer the Just the Jackpot option, which two plays cost USD 3. Only the jackpot can be won; none of the lower-tier prizes are available on such a wager. In most cases, a lottery joining Mega Millions or Powerball on or after January 31 2010 offered Powerball before the cross-sell expansion. The Big Game was created and designed by Michigan Lottery Commissioner Bill Martin and Illinois Lottery Director Desiree Rogers after having discussions regarding a multi-state game with lottery directors. The game was initially offered in six states; the logo for all versions of thegame featured a gold-colored ball with six stars to represent the game’s initial membership, although some lotterying insert their respective logo in the ball.

Alabama, Alaska, Hawaii, Nevada, and Utah do not sell lottery tickets. In 2013, Wyoming became the 44th state to establish a lottery; the next year, it began, initially offering both Mega Millions and PowerBall before January 30, 2020. Tickets for Mega Millions began to be sold in Georgia, Illinois, Maryland, Massachusetts, Maryland and Virginia on August 31, 1996, and Massachusetts, Michigan, and Virginia, on September 1, 1996. The Georgia Lottery was a member of MUSL at the time of its creation, and wanted to sell the remainder of the games for both games at the same time. Mississippi began selling lottery tickets in 2019; it joined Mega Millions on January 30,. 2020. Nebraska, Oregon, Arizona, Maine, Colorado and South Dakota also have joinedMega Millions since the expansion. Florida joined Mega millions in May 2013; it will join Mega Millions in January 2020. The first Mega Millions drawing was in 2002; the current version of Mega Millions requires players to match 5 of 70 white balls, and a second field, of 25 numbers. Each game costs USD 2. TheMegaplier was made available to all Mega Millions jurisdictions in January 2011; it began as an option available only in Texas. The Megapliers are 2x, 3x, 4x, and 5x The MegaPlier is not available in California, or on Just theJackpot wagers.

You want to know more about Mega Millions?

This page is based on the article Mega Millions published in Wikipedia (as of Jan. 23, 2021) and was automatically summarized using artificial intelligence.