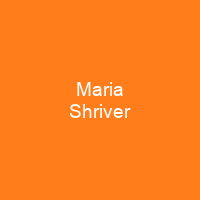 Maria Owings Shriver is an American journalist, author, former First Lady of California, and the founder of the nonprofit organization The Women’s Alzheimer’s Movement. She was married to former Governor of California and actor Arnold Schwarzenegger, from whom she filed for divorce in 2011. She is currently a “special” anchor and correspondent for NBC News.

About Maria Shriver in brief

Maria Owings Shriver is an American journalist, author, former First Lady of California, and the founder of the nonprofit organization The Women’s Alzheimer’s Movement. Shriver has received a Peabody Award and was co-anchor for NBC’s Emmy-winning coverage of the 1988 Summer Olympics. As executive producer of The Alzheimer’s Project, Shriver earned two Emmy Awards and an Academy of Television Arts & Sciences award for developing a \”television show with a conscience\”. She is a member of the Kennedy family; her mother, Eunice Kennedy Shriver, was a sister of John F., Robert and Ted Kennedy. She was married to former Governor of California and actor Arnold Schwarzenegger, from whom she filed for divorce in 2011. She is currently a “special” anchor and correspondent for NBC News. She appeared as herself in the film Last Action Hero. She also played a minor role in a 2006 episode of the television series That’s So Raven promoting a \”Preparedness Plan\”. Shriver returned to television news as substitute host of panel-discussion talk show Larry King Live on CNN with musician Sheryl Crow and other guests on March 23, 2007. In 2008, she executive-produced American Idealist: The Story of Sargent Shriver. The documentary originally aired on PBS on January 21, 2008. She has been a lifelong advocate for people with intellectual disabilities. She founded the International Board of the Organization of Special Olympics, her mother’s organization, in 1968. She also serves as Chair of the Audi Best Buddies: Hearst Castle, a bike ride that raises millions of dollars for programs supporting people with mental disabilities.

In her book Ten Things I Wish I’d Known Before I Went Out Into The Real World, Shriver says that she became passionate about broadcast journalism after being sent to the back of the campaign plane with the press corps while volunteering for her father’s 1972 U.S. vice presidential race, calling these orders “the best thing that ever happened to me’ Shriver also served as Saturday anchor 1989 & Sunday 1990 of NBC Nightly News. She was a contributing anchor on Dateline NBC from 1992 until 2004. She took an unpaid leave of absence from NBC News when her husband became a candidate in the 2003 California gubernatorial recall election. Following her husband’s November 17, 2003, inauguration as the 38th Governor of. California, she became the First lady of California. She then returned to reporting, making two more appearances for Datelines NBC. Shriver asked to be relieved of duties at NBC News, citing concerns the network had over the conflict of interest between her role as a journalist and her status as an advocate of her husband’s administration and her increasing role as the First Lady. In addition to the WE Include program, she is on the advisory board of the Sargents Shriver Peace Institute, which raises public awareness of her late father’s legacy as a peacebuilder and offers educational training programs.

You want to know more about Maria Shriver?

This page is based on the article Maria Shriver published in Wikipedia (as of Nov. 30, 2020) and was automatically summarized using artificial intelligence.