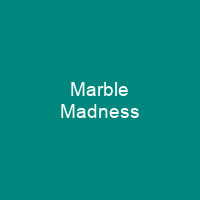 Marble Madness is an arcade video game designed by Mark Cerny and published by Atari Games in 1984. It is a platform game in which the player must guide a marble through six courses, populated with obstacles and enemies, within a time limit. A sequel was developed and planned for release in 1991, but canceled when location testing showed the game could not succeed in competition with other titles.

About Marble Madness in brief

Marble Madness is an arcade video game designed by Mark Cerny and published by Atari Games in 1984. It is a platform game in which the player must guide a marble through six courses, populated with obstacles and enemies, within a time limit. The player controls the marble by using a trackball. A sequel was developed and planned for release in 1991, but canceled when location testing showed the game could not succeed in competition with other titles. Marble Madness was Atari’s first game to use an FM sound chip produced by Yamaha, similar to a Yamaha DX7 synthesizer, which created the music in real time so that it was in synchronization with the game’s on-screen action. It uses the Atari System 1 hardware, which was an interchangeable system of circuit boards, control panels, and artwork. It features pixel graphics on a 19-inch Electrohome G07 model CRT monitor and uses a Motorola 68010 central processing unit with a MOS Technology 6502 subsystem to control the audio and coin operations. The game allows two players to compete against each other, awarding bonus points and extra time to the winner of each race; both players have separate clocks. Each course has a distinct visual theme. For example, the first race is a simple course that is much shorter than the others, while the fifth race features polka-dot patterns and is oriented in a direction opposite that of the other courses. As the game progresses, the courses become increasingly difficult and introduce more enemies and obstacles.

It was the first to be programmed in the C programming language, and one of theFirst to use true stereo sound. In designing the game, CernY drew inspiration from miniature golf, racing games, and art by M. C. Escher. Critics praised the game’s difficulty, unique visual design, and stereo soundtrack. The game was ported to numerous platforms and inspired the development of other games. It has been called one of Atari’s most successful games ever, with sales of over $1.5 million in the U.S. alone in 1984 and over $2 million in North America in 1985. It remains one of only a handful of Atari games to have been released in both arcades and home computers. In the arcade version, a player control the marble’s movements with aTrackball; most home versions use game controllers with directional pads. The goal is to complete six maze-like isometric race courses before a set amount of time expires. With the exception of the firstrace, any time left on the clock at the end of a race is carried over to the next one, and the player is granted aSet amount of additional time as well. It uses an isometric grid, which is similar to the one used in miniature golf and racing games. After the video game crash of 1983, game development within Atari focused on providing a distinctive experience through the use of a unique control system and by emphasizing a simultaneous two-player mode. The next Atari game to be released was Atarihusiastic, but the game was never released.

You want to know more about Marble Madness?

This page is based on the article Marble Madness published in Wikipedia (as of Dec. 07, 2020) and was automatically summarized using artificial intelligence.